I've spent the evening playing around with a few of the StartPages that are around the place for a couple of reasons - one, to see if there are any good "gluing" solutions for my e-portfolio possibilities and two, because I'm covering them in one of my 15 minute sessions for the Web 2.0 Showcase at TSOF on September 21 and I need to know what I'm talking about. I've been using two of them, Protopage and PageFlakes for a while now but I wanted to see if any others were better or offered more features than the other.

So, what's a StartPage? To me, it's one of those great ideas that helps to make sense of the web as it is today. Most are powered by AJAX and have small modules, feed boxes, widgets or "flakes" that can be added and customised. I have so many web services that I've signed up for and that I visit as part of a weekly or daily routine - a StartPage ties a lot of things like that into a one-stop-shop or portal that can launch you into the key parts of your online existence. A good StartPage should give me access to my email, link me to websites of personal importance, should use the flexibility of RSS and have multimedia capability so that some stuff can be viewed from within the StartPage itself. A StartPage should have the potential to be viewable easily (on monitor or IWB, I think) and the content switched around to suit personal taste. I personally like to have a fair bit of choice but not choose between bits of rubbish or trivia. A box that gives me daily quotes from George Bush doesn't add to my daily productivity.

So here's what I reckon. Protopage. This is the first StartPage I started playing around with last year and I haven't really added much since then either. It has different colour backgrounds and themes and the ability to add one of seven types of widget including shortcut links, rss feeds and sticky notes. The idea looked pretty good when I first started but the fact that there aren't many widgets to add or services that can be added in means Protopage is looking a bit dated already. 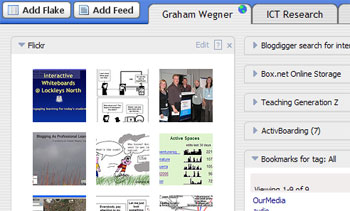 PageFlakes. I really like PageFlakes. The first bonus is that it doesn't have a huge header which means browser real estate is maximised. I can add in a Flickr feed by user or tag, I can add in interesting "flakes" like my del.icio.us account, clock, rss feeds and searches. There is also a sizeable community developing flakes for use although some of them are not terribly useful to me. I can add tabs for other pages and everything is just neat and tidy. For a while it all looked a bit sterile but now PageFlakes have added a handful of colour scheme choices to jazz things up but for me it's the bonus partnerships for different functional flakes that work really well - a good example is the box.net link that means my files stored there can be accessed from my PageFlakes page. There looks like more potential for new "flakes" to make this an even better StartPage environment. 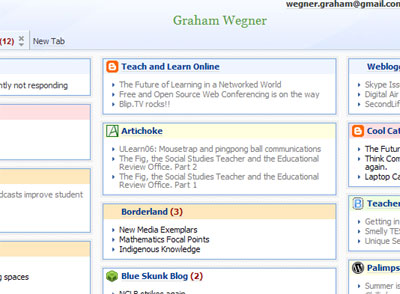 I then had a close look at NetVibes. This is a very attractive StartPage and like PageFlakes, features modules that cater for more than just RSS feeds, including a Google Maps module, weather module, search engine function, del.icio.us feeds and so on. I'm not sure if this would be better than Bloglines as a feedreader only however if you track a lot of blogs - I set one page up with my Must Read Blogs and that looked and worked well but was still only 15 feeds on the page (Bloglines looks after more than 100 in my account). I think that the only disadvantage Netvibes holds over PageFlakes is the fact you can't make your StartPage public. 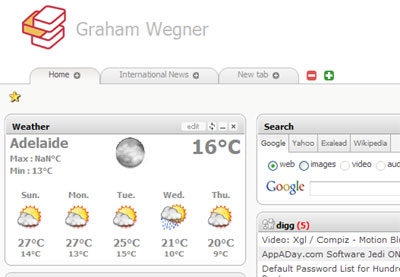 The final contender in this interesting new category of web application is called WebWag. It seems to be following hot on the heels of NetVibes and PageFlakes but still needs to develop some unique features to make it an attractive alternative. If you wanted to set up an international news feed, it does come with plenty of pre-configured news feeds from all of the major players in the world of news media. I'm not a big fan of the wasted space in the header and there is no obvious ways to add new modules easily. It's pretty new so could be worth watching for future developments, but it would probably run fourth in this particular race.

So, there's a layman's look at the main StartPages around. I realise SuprGlu has been around for a while as well, but I see that more as a republishing format that weaves del.icio.us and blog posts together more than this new category. My tip - Pageflakes is the best choice especially in the context of gluing together my free-range, small pieces e-portfolio format but if Netvibes added a make-public feature, it might be worth developing that as a StartPage option.