I didn't know that my oldest son was into online gaming until I found a crumpled monochrome print out of a kids' website. I asked him what it was and he just said,"Oggy Moshi."

It turns out that Oggy Moshi is the latest choice of RPG for seven year olds at my son's school, and I suppose it's a type of virtual world as well! If you remember the old Tamagotchi pets that were a craze a few years back where you had to feed, toilet and spend time with them in order for them to survive - well, this game is an extension of that. So, take a step into the online world of a junior primary child and have a go at Oggy Moshi - it's surprisingly addictive (I know I was enthralled for minutes) but watch out for those bugs! 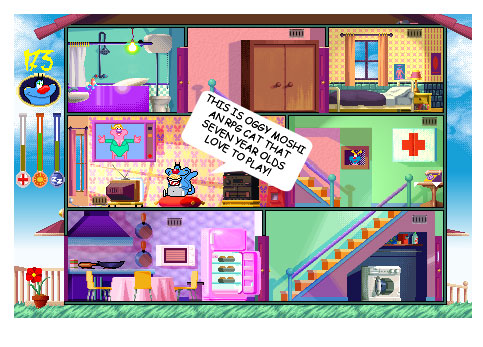 Update: Turns out that Oggy is produced by French animation company Xilam and is a spinoff of a French TV cartoon series Oggy and the Cockroaches, which reminds me a lot of the Simpsons' "Itchy and Scratchy show".