One of the advantages of teaching in the primary sector is the freedom to be flexible in the delivery of the curriculum. It also means that when teaching important skills it's good to be able to put specific content to the back of the queue. As part of our S.O.S.E (Studies Of Society & Environment) program, our school uses the the SACSA Companion Document (pages 10 - 11) that lists the inquiry model for information literacy. As part of our commitment in our Middle School program towards student initiated curriculum, we used a model called "Personal Reseach Projects" to help facilitate the skills behind such an approach. We also wanted an authentic vehicle for the acquisition and development of English skills in the Listening and Speaking areas.

The students choose a topic (for this term, they had a free choice) conduct their research using the steps of inquiry model - setting up questions, identifying potential resources, taking notes, sorting the information, revisiting questions and making sense of that information - then they had to construct that learning into a multimedia presentation for their peers. There was lots for the kids to learn ranging from using appropriate key words in search engines, compiling an effective bibliography as they went to then structuring their raw notes into a format for presentation.

One of the main points I made in the very early stages was that although the topic choice was their own, they had to consider the needs of their audience. It was their chance to teach their peers. So, at the initial question posing stage, I asked the students to give their PRP a catchy title like a television documentary (The Rise of The Roman Empire, Monkey Mania, The Anzacs At Gallipoli) and write it on one side of an A3 piece of cartridge paper. On that side, they had to do a personal brainstorm, spilling out all that they knew about their topic regardless of accuracy. Once they had done that, they had to look for emerging categories or sub-topics. Later this year when we have our laptops up and running I'll get the students to use a mindmapping application that will make it possible to drag and re-arrange the information.

I then added a twist. Instead of each individual creating their own list of questions, the other side of the paper was rotated around the classroom and the future audience members posed a question that they would like to be answered by the student when they viewed their presentation in six to seven weeks. In this way, from the very beginning, the students would be considering the needs of their peer audience. Once the students had received their questions back and organised them into identifiable categories, they began their research process where they could use print and digital resources to find out the answers to their questions. As the students are still young (10 and 11 year olds) and inexperienced at forging their own way through a topic of their own choice, I suggested that five main categories of information would be ideal. While that worked easily for a topic like Rainbow Lorikeets where the student focussed on the categories of Appearance, Habitat, Diet, Life Cycle and Pet Care, the student who chose Drought (very topical in South Australia) found the task more challenging and harder to separate into distinct sub-topics. The task allowed for high flying students to go as deep into the topic as they wished as we saw with a detailed and very informative presentation on the ANZAC Soldiers, but gave less confident students an achievable goal.

Most students gravitated towards the computers and the internet. I spent most of my lesson time in the Computing Room moving from student to student, offering suggestions about the most appropriate Google search terms to find the key chunks of information needed to answer their question. I also used the interactive whiteboard back in the classroom to model effective searching and to copy the web URL into a document if it was utilised. Sadly, not all students understood my intent as Google.com still appeared on several bibliographies at the final presentations. However, plenty of students pointed that out to their peers using my oft-repeated story that if you use a book as a reference, you don't record "librarian" as the source!

The students then enjoyed designing their presentations which were to use the interactive whiteboard to create a multimedia effect combined with their own spoken script. All students chose Powerpoint - it wasn't pushed by me at all but I can understand their choice. In my experience Powerpoint is one of the easiest software applications for my students to pick up and use. Within my class there was also a lot of communal help and problem solving. Using some of the basic guidelines for presentations that I've gleaned from experts like Garr Reynolds and passionate quality presentation advocates like Dan Meyer, I pushed a reduced text model (that was expanded upon orally) and use of quality images to demonstrate important points. For the first time I had students using Creative Commons licensed images where possible to create visually interesting presentations - as Flickr is blocked, we used the alternative filter free FlickrCC pipeline as a source. Not all students followed these well publicised guidelines but they were featured in our class developed Feedback Rubric. Some of the criteria came out of our involvement as peer reviewers in the Horizon Project. Looking at other student produced videos gave them many aspects to consider. An example of a class agreed no-no for digital presentations was the use of red text on a black background and the overuse of animations and transitions is actually very annoying for the audience. In fact, it was some of the class's youngest students who developed minimal text, dominant images, sensible font, consistently designed presentations that earned high ratings and superior feedback from their peers when they did present.

The final piece of the puzzle came with their actual presentations to the class where the students used cue cards to keep on track, battled their nerves and became the teacher of their chosen topic. We all learnt a lot and the feedback process became very sharp as we saw more and more of the presentations. The kids became very critical but fair, and I would often get them to rephrase their observations as advice for the future. Next term, the students get to choose again but it must be a totally new topic for them that they haven't ever tackled before. Hopefully, the students will be building on this term's experience and looking to learn and then share that learning effectively to a critical audience. 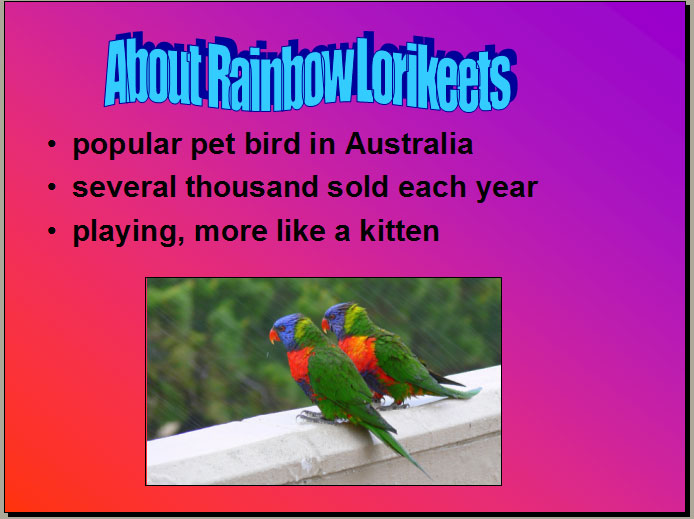