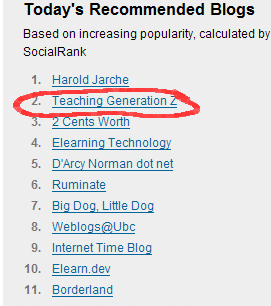 Name the second hottest elearning blog on the web.

Now before you choke on your Weetbix, coffee or whatever you happen to be consuming at this moment, bear in mind that this is the opinion of a new "service" on the web called Social Rank. I won't link to it here right now because experience has shown that not all new services casting edubloggers in a favourable light are what they appear to be at first glance. Anyone remember the OEDb list of Top 100 Education Blogs that caused a bit of controversy late last year? This blog was in that list too.

Don't worry - there's plenty of talent in the list - but where's Stephen Downes, Josie Fraser, Dave Cormier or Leigh Blackall? My blog isn't even focussed on the topic of elearning and certainly is a grabbag of educational allsorts that defies logical categorisation. Hmmm.. if I wasn't so cynical, I'd be flattered. Instead, the odour of day old prawns seems to waft off the screen at me when I'm looking at the Social Rank elearning site, Learning Signal. (No link - try Googling it if you must.)

But can anyone apart from SocialRank themselves explain how this "service" is supposed to work? And how does TGZ rank so high (for the moment)?

As part of the public school system here in South Australia, I have access to numerous resources and tools that help to measure my capabilities as an effective educator as well as provide essential data for possible future initiatives and directions. One tool that I've recently used is called EdCap (the Cap being short for Capability) which is a thorough survey tool that gets teachers to rate themselves in various facets of elearning and the embedding of ICT into their classroom practice. Of course, Edcap reveals as much about my department's priorities as it does about any educator's skills and attitudes level. There are 35 questions divided into ten sections which give the participant a "grade" into ore of four segments on a continuum. I finished up my Edcap survey the other day and one section that stood out in my mind was in relation to my participation in online learning. There were ten statements that I had to rate on a gradient of five starting from Never to More Than Weekly. I couldn't help but think about blogging when I came to the final statement - I engage with my peers in on-line communities.

And the reason that this statement seems to be an important one to me is because of the whole idea of communities online which could and does take many shapes and forms. For me, it's the process of blogging that has connected me with the most amazing array of educators worldwide and it's still the process that is most powerful in providing new and relevant leaning for me. It's become really important for me to tune into voices that I've come to value and respect, that challenge and redirect my own point of view. I keep adding new voices to my Google Reader and I have some of the other network tools to blame for that. I'll follow someone on Twitter and they'll post a link to their latest blog post - I'll go and read it and wonder to myself why I'm not subscribed to their blog and bang! Another node on my network.

A recent voice that I've really enjoyed is Clay Burell (I've been aware of his work for a while but hadn't really crossed virtual paths before) and his recent post that pitted blogging against newer forms of online community like Ning fits right into this exploration. Clay says:

Before you read it, don't get me wrong. I think Ning is a great thing - but, at the risk of sounding like a prig and a purist, I don't think it's in the same ballpark as open blogging. And I worry that teachers who mistake these walled blogs (or social blogworks?) for "open range" blogging will never learn the crucial role that Technorati, tagging, hyperlinking, and such play as the "ligaments" of the connectivity that is real blogging. And thus never be able to introduce their students to that experience.

I find that Ning is a bit of a walled garden, a captive audience drawn together on a common theme and it is a very useful tool, providing an online community starting point for those educators new (and sometimes experienced) to the interactive online world. It's a pre-packaged way to link up and network with others - it provides so much in one spot that it's tempting not to go any further or look at other possibilities. Even allowing for the fact that some of these Ning sites have large numbers of members (Classroom 2.0 has over 3000 members) you are effectively limiting your network by seeing this as the solution to your online learning community needs. Where Clay is alluding is that there is more power, more control in the practice of blogging where you actually become the architect of your own learning network, creating your own unique learning community. It's been argued before that it takes time to build up your audience and gain meaningful feedback via comments but I have found that taking that path reaps a lot of unexpected rewards.

Using other network tools can help fast track newcomers and get them noticed quicker than a couple of years ago. An example of this is when Darren Draper's video "Are You Paying Attention?" went viral and edubloggers wanted to know where this innovative thinker's online home was. His blog, Drape's Takes was born out of that particular avenue. Another blogger who caught my notice earlier this year was Kevin Sandridge who used twitter cleverly to add key people as his friends and in a short amount of time gather valuable attention to his blogging. He also worked out the power of Skype as well and leveraged that by seeking out voices he wanted to interact with to participate in conversations and quickly built a network that may have taken much longer even twelve months ago.

So, I would hope that if we think that giving our students the skills to sort through the information overload and become meaningful contributors to the world is important that we don't model the easy option to them and have just "joining a community" as our way of engaging with the network.  If you read and reflect , you want your ideas as open to as many people as possible.

Although I'm not much of a handyman (my wife will vouch for that!), there is a great deal of satisfaction in creating something for yourself as opposed to having it provided for you with all of the amenities provided. Building your own network from blog posts and comments, twitter connections, wiki connections, skype name exchanges in chatcasts means you have personal investment in what you have constructed. As cool as Ning is, I could abandon it tomorrow without a second thought. I couldn't do that to my own online presence - I have built up so much collegiality with people worldwide, invested too many hours in my own writing and resources and gatecrashed too many Skype chats and other impromptu sessions or webcasts to turn back now.