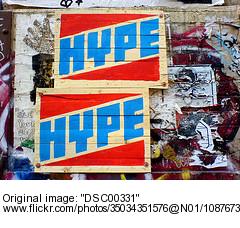 "Don't believe the hype - it's a sequel
As an equal, can I get this through to you.."
Artist: Public Enemy
Album: It Takes A Nation Of Millions To Hold Us Back
1988

This lyric strings together a lot of the online stuff I've been encountering and thinking about over the past week - kind of like a soundtrack in my brain. Public Enemy's plea to be wary of the American media (although of much greater magnitude and significance) can be easily applied to some recent examples and give me a greater appreciation of those edubloggers prepared to go against the grain, to question the "wisdom of the crowd" and to write some unpopular things. Bill Kerr and Tim Holt, for example, have important things to say and more often than not are using their blog as a form of mirror to their own and others' contradictions. Hey, why not? As far as I can see, they are exposing some of the hype.

More of my self-identified hype.

K12 PreConference Keynote Hype.
After not downloading this highly sought after file within the first 24 hours, I noticed a lot of praise laden blog posts filtering through, even a couple verging on gushing. The hype was unbearable - I had to see this for myself. But, I saw a long winded talking head video with overstretched metaphors and plugs for American coffee houses - what was the fuss all about? I didn't get it - an airport, so what? However, the hype made me watch it all the way through just to be sure. My impressions didn't change - but just to be clear, I like David Warlick, I didn't like the keynote. And I did post my opinion over on the K12 blog.

Facebook Hype.
I can't open my GMail without getting friend requests, pokes, questions, updates and general Facebook digital output. I joined Facebook because I wanted to see how this hugely popular social networking tool worked but I didn't bargain on the hype. A great Skype conversation between Sue Waters and Alex Hayes on Wednesday evening eased my mind somewhat - it's a walled garden where I can safely let the weeds grow without sacrificing my precious time.

Twitter Tool Hype.
For all its great networking value, twitter tends to help breed tool hype of the most mouth-frothingly kind.
UStream - I Scream. (Yet some people call it life-changing!!)
Skitch? Don't bother unless you're a Mac lover.
Chatcast - call and your online friends will come running.
I do believe that Darren Draper has captured twitter hype perfectly in this post.

Don't worry - I've generated plenty of my own hype on this blog - just that no-one seems to want to take it any further!