I really like reading Dan Meyer. I first latched onto his blog early this year via Bud Hunt and for me, Dan epitomises the philosophy of an Open Educator with his forthright manner and willingness to share his classroom practice and very useful resources. Not everyone appreciates his style and he can rub some readers up the wrong way - I think he laid some sarcasm on me way back but as I'm half a generation older and a half globe away from his particular brand of youthful written English, I wasn't aware or savvy enough to realise!

Anyway, I read this really great blog post of his the other day that included a slideshow looking at the Estimating Of Age of celebrities. As karma would have it (that's as spiritual as I tend to get), I was looking for something to hook into the category of "algebraic reasoning" with my class and said so in the comments.

Dan, you saved my day. Just when I needed some more insight into my class’s initial algebraic reasoning, your post pops in my aggregator. I’ve modified the ppt to include some Aussie celebs and altered the DOB data for an Aussie classroom - do you mind if I share the downunder version via my box.net? Let’s see how this goes with 11/12 year olds - I like the fact it is modifiable for whatever age group. Cheers! 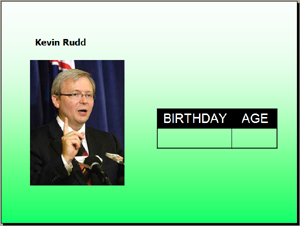 I didn't alter the slideshow all that much - just got rid of the "who's that?" faces and replaced them with near Aussie equivalents and stuck my ugly mug in at the end. The lesson itself turned into two and was excellent. The kids' reactions followed Dan's script pretty closely considering their younger age and loved the initial guess and check via Dan's tightly designed slideshow.

But it was the following conversations and mathematics that was really the icing on the cake. First the question of how do we determine the "Best Guesser." The kids initially said that it should be whoever had the most correct. As we had one of the more outspoken (and popular) class members with nine correct guesses, some were happy to have identified a winner.

But as I shifted the focus from the winner to the way of identifying that winner, kids were happy to try some other methods. We tried the positive and negative numbers, the goal of which one smart ten year old cookie quickly identified as getting the numbers as close to zero at the end. The best that was mustered was -7, (the worst was -60, that's underguessing ages of 18 people by 60 years!) so the class were happy to try something else, the average of years off regardless of under or over-guessing which had a new winner identified at an average of 2.21 years out with her guesses.

The class debate that followed was priceless as students spoke for or against the best method for identifying a winner. Being young kids, it was hard for them to separate the personalities behind the winners from the best method - one enterprising lad suggested another 18 celebs in a Best Guesser playoff! But in the end when put to the vote, the class felt that getting close most often was truer to the mathematical goal of estimation than most exactly right. They'll still be talking about it tomorrow.

For those interested, the DownUnderRemix can be downloaded from this link - I must say that my citation skills went out the window and I hope that the images used could broadly be seen as "fair use."

Keep 'em coming, Dan. I know I must share more often as well.