In English, I've been trying to weave the skills of debating into my classroom. It has been something that the majority have found quite difficult, with many mistaking the ability to argue in a contrary fashion for insightful and clever debate. Their confidence in combining oratory skills and a considered point of view has led me to go back several steps and try and nut out a better way to scaffold their way towards a successful in-class debate. I tried to use engaging topics to draw out their enthusiasm (Sport is more important than Science) but a lot found it hard to get beyond their own pre-conceived ideas. I then tried a simple approach where the need to be "right" was less important (Cats are better than dogs) but their keenness was not there.

Early on, I realised that using official debate structures were too large an initial leap, especially when the skills I really wanted to focus on were using powerful language to express a specific perspective, being aware of opposing viewpoints and being able to counter these in a persuasive way. The students needed to be able to get their ideas down in print first, to hold their ideas up to the light, re-word them and listen to how "powerful language" is used in the art of persuasion.

So, in the spirit of sharing, I developed a paper based written debate format that I'm hoping will scaffold the kids towards considering both sides of any issue. I used the free CMap Tools mind mapping program for this as I really like the font and the way it lays out a flow chart like style. It also exports to PDF so I can create something here on my MacBook and share it here or print from my school Windows laptop without any tricky formatting issues.

Here's my PDF original on the topic "Mobile Phones Cannot Be Owned By Primary School Students."

If you have CMap installed, here is the file you can open and edit for your own purposes. I'm not sure which is the best format for exporting that would facilitate others editing for their own classroom so any suggestions would be welcome. 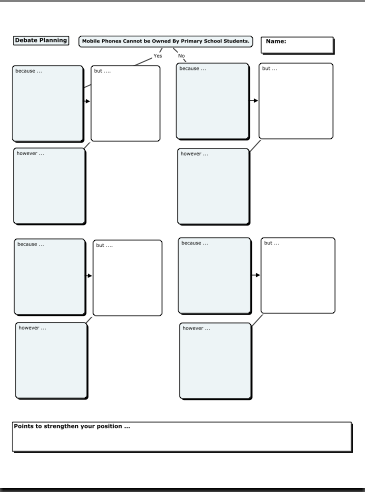