D'Arcy Norman poses the question, "How do you connect to people online?" This post is my response to that question.

It's this blog that I value the most as a connection point with others. It's where I started dabbling in this networked way, where I connected to my first edublogger colleagues, people who I hadn't met but whose words and ideas drew me in and got me writing and sharing my own little piece of the world. Through comments left by others and by responding to comments on others' blogs, I widened my circle of connections and the network started branching out in unexpected, intriguing pathways.

New concepts like Leigh Blackall's networked learning, Will Richardson's connective writing and Konrad Glogowski's classroom learning communities were all new perspectives that I would not have encountered in a non-digitally connected world. They taught me about the transferability and reinterpretation of new ideas, as much as someone more recently like Dan Meyer with his "Be Less Helpful" mantra.

It's probably because I enjoy the process of writing that this particular outlet has such appeal. I've migrated and used other tools to connect - ning, Twitter, delicious, and even more recently Second Life but invariably, my network has been built on the back of edubloggers or secondary connections from those edubloggers. There are those people who started their connection in a similar fashion at a similar point in time - people like Jo McLeay, Darren Kuropatwa and James Matthew Nelson. Initially, I felt an obligation to add anyone who read my blog (identified via comments) to my blog reader and thanks to a feature in Bloglines that I used at the time, anyone who I could identify from the subscriptions list. But interestingly for a bloke who hasn't all that much new to add to the conversation, the readership has grown beyond that need for reciprocal subscribing. I realised that I can't read and converse with everyone who reads this blog, and that are many bloggers who I read who don't know that I exist!

This realisation certainly helped me to manage my usage of a tool like Twitter where I can have a massive disproportion between followed and following. I must confess that I feel more comfortable in the asychronous world of the blog post where I can write something, set it free, see whether it strikes any chords out there than the weirdly hybrid synchronicity of the 140 character "Is anyone reading this? Whoops, now I'm having a conversation." I share better from my ramblings here than by pumping out URL shortened tidbit links - that's just not my skill set and there are plenty of others who do that much, much better.

The connection to others is very hard to explain. There are others out there scattered across the globe to whom I have felt a collegial connection; a new type of friendship that starts with a shared interest in web based and enable learning but manifest itself in a desire to find out a little more about the person behind the blog and have a much more personal conversation. It's interesting - sometimes people connect to what I write and sometimes they connect just to me as the person they have gotten to know via this blog, twitter exchanges, invitations to participate in projects and Skype conversations (although these happen much less often than they used to). Alex, Doug, Chris, Ken and Darren are all more than just names in an aggregator or a contact list - I think of them as friends who would help me if I needed it. 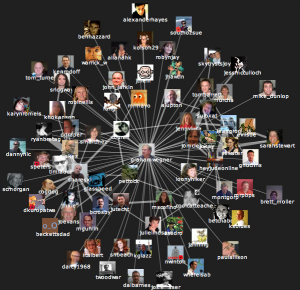 I don't venture that far from home either - a combination of family commitments and a job that doesn't require much travel - but via these connections, the long term comment exchanges, the occasional Skype chats and the @messages on Twitter, I've managed to meet quite a few other educators both far and near. I can still recall having a meal with Michael Coghlan and Alan Levine with only half his voice left during his speaking tour down under and hosting Tom Barrett and his family for dinner at our place was simply a delight. None of this possible without online connection. I get hints from others like Clay, Dean and Chris that should I ever venture into their neighbourhood, the welcome mat is already waiting.

How do I do the connecting? The work day is invariably very busy and I have this two hour window from 8.30 - 10.30 pm each evening after the boys are in bed where I can open up the laptop and do a task switching blend of planning, reading, chatting and exploring. My iPhone has become the most constant connection now, as it is easy to just turn on and connect whenever a spare opportunity arises. I use a Pageflakes startpage to jump off into various places, I use GMail and Google Reader, Tweetdeck on the laptop, Twitterific on the iPhone and I keep a watchful eye on some of the Nings I have joined, my delicious network feed and the occasional Skype chat. I'm still getting past that "ghost town" feeling whenever I venture into Second Life and find it interesting that some of my real world insecurities in social situations have followed me in there. Writing like this in text form seems to be comparatively liberating.

The longer I have played in this digital world, the wider and more diverse my network has become. It probably has an overwhelmingly "education flavour" to it all but that's OK with me because the spread of educational situations is so varied. I'm not quite the free ranger - in fact, I am still bemused that anyone finds what I have to say to be of importance - as if something works, I tend to stick with it.

So, D'Arcy, there you have it. My response to your prompt. Your blog was amongst the first added to my aggregator. Yours was one of the first where I saw fit to criticise a blog post. Your education world is vastly different me here in suburban Adelaide but there you have it, we're connected. In the loose, multi-directional, serendipitous cluster of nodes that make up my Personal Learning Network, this is how I connect to people online.

7 thoughts on “How I Connect To People Online”