We have these old Leader laptops at my school that were part of our original batch of teacher laptops and they have not really been used since those teachers upgraded to more powerful machines in 2006. We put them out in classrooms for a while as bonus computers but they've struggled with our network image. So they've been sitting in the technician's office (aka the server room) for over a year and I had this idea about using them as a side project for tech savvy kids in my classroom. One day when I was contemplating on Twitter what to do with our old Pentium 4 desktop that was being strangled by viruses, Chris Harvey recommended Ubuntu as an excellent operating system that would breathe new life into older machines. I know a few other members of my network are Linux advocates so I figured that it would very appealing for these tech savvy students to tinker and set up these machines in my classroom. So, I downloaded the latest version of Ubuntu and burnt it to DVD and grabbed one of the old laptops for the summer holidays.

So, you're thinking - big deal. I know that many of my network are avid Linux users (of which Ubuntu is but one option) and that installing and playing with open source products is just part of what they do. But I am no computer whiz. I have never installed any operating system on any computer before and never really used a Linux based operating system. I'm not really that technical minded as I discovered when I went looking for details on how to get rid of the original XP operating system. I got lost for several hours, looking through forums, downloading a couple of utilities only to discover that I needed to know how to get into BIOS, or how to partition a disk or any number of things that kept telling me I'm out of my depth. So, if anyone knows of an idiot proof way for me to ditch Windows and keep the Ubuntu install (or failing that how to wipe the laptop completely and re-install Ubuntu only) I would be most appreciative. These old babies only have 40G hard drives and I don't need any MS memory hogging stuff eating into that precious space. The batteries are nearly shot and they have makeshift power adaptors, but they do offer a chance to boost what we can do in our 2010 classroom.

My vision is that these laptops become an extra resource for students to complete work on, access the web, edit photos, create graphics and so on. The tech savvy kids will be able to install and uninstall open source programs (although Ubuntu comes with an excellent array of software as part of the package) and teach themselves and others a bit more in an environment that is geared towards education and help them to move beyond the Windows only world view of computing.

Here's where I'm open to suggestions. Your ideas on how I could use these five laptops would be greatly appreciated. Maybe I should get the kids to run a different flavour of Linux on each one. They could become the publishing and graphic design workhorses leaving the faster laptops we have for working on the wireless network. What technical challenges could I set my small band of junior geeks? I am sure that they will quickly master the particular pathways of the Ubuntu environment and show me a thing or two. What would you do? 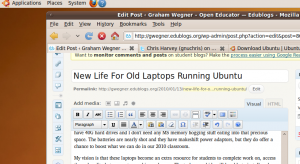 Posted from an old 2005 Leader Celeron laptop running Ubuntu 9.10. A bit less pretentious than posting from my iPhone.