When I first started reading blogs, I used Bloglines as my aggregator. I still have my account with the feeds I had set up at the point of abandonment still piling up until I occasionally purge the lot. Over time, I switched to Google Reader which was a lot neater and easier to manage. There was one feature from Bloglines that was really cool that I wish was possible in Reader (unless I am mistaken) involving the ability to view other subscribers' feed lists. I found so many good blogs via this FOAF style method. 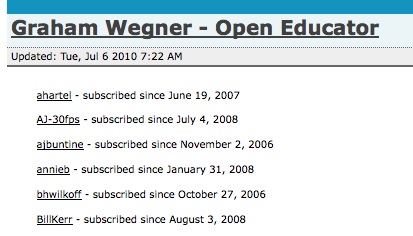 I could see how other educators (like Ben Wilkoff above) were setting up their own feeds, how they named their folders and even when they had first subscribed to my own blog. Of course, now I have no idea whether these subscribers even check their Bloglines any more. And I can't peek into their Google Reader set up in the same way.

Google Reader allows me to share posts that I like and think that my smaller group of Followers might find useful. But this is different from the way I set up and access my feeds. Here's a quick look: 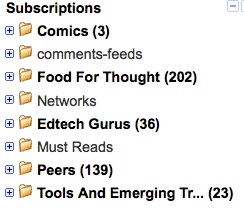 These are my folders for my 151 (currently) feeds. The Must Reads is meant to be my first stop but when I'm pressed for time, I'll often go straight to the Edtech Gurus (terrible title, I know) folder and read Stephen Downes and Tom Hoffman because both are succinct and to the point. The Must Reads folder needs dedicated time to peruse fully. I'll open it now:

These are my most trusted sources. Back in the Bloglines days, I always liked how Will Richardson would rename his feeds solely to the blogger's name and I still copy follow that idea. There are a couple in there who haven't posted in a long time and it is always a challenge to find which neck of the net Alex Hayes is posting from but this is a pretty stable group. That's not to say that I don't find must read material in other blogs (the other 132 feeds) but I feel guilty if I don't read these guys in detail. It goes to show that I tend to read people more than ideas. There are very few non-educational feeds in my Reader, which is a weakness but I do think I draw from a very wide range of educators in very diverse sectors and situations. I read very few group or corporation blogs.

I will probably play around with this arrangement in the near future and I'm constantly adding new feeds that take my fancy. I need to redefine the folders a bit better. Putting someone like Ken Burgin into the Peers folder isn't quite the right fit but putting him on his own in a Hospitality/eLearning folder doesn't quite work either. Does anyone have an approach to their Google Reader that they would like to share?