I am now into my sixth year of writing here on this blog. I don't write here as often as I would like but it still gets me writing much more often than I did pre-2005. I think the last time I wrote as much was back in teacher's college. My lecturer, Mem Fox, got us all to keep a journal. Not one that she would read but one she wanted us to use with regularity, to get into the habit of writing, to start to hear my own voice coming through the writing. I really got into it back then. When I was stuck for things to write about, I wrote out the lyrics of songs that I felt were speaking to me at the time. When I got married and moved back to Adelaide, I found that journal again when we moved into our house. I read some of it but the rawness and the angst was too much for me and I threw it into the rubbish bin. A bit of a shame but it goes to show that the compulsion to write is a hard one to shake.

The other day, one of my colleagues admitted to me that he hates writing. My first reaction was to think that it was odd that he ended up being a teacher, considering that reports need to be written, students need to be taught how to write and you can't land a job without a written application. I suppose that I'm lucky in that regard - I enjoy writing. It's not a hardship - it is fun.

I often read about the "edublogosphere" - the name used to describe this swarming mass of educators who've discovered the power of writing and sharing online. It does feel like that there are much less than six degrees of separation between many of us but it's a bit like looking up at the night sky and thinking that I can see all the stars that exist. My Google Reader only captures a selective sample of collective wisdom and finding a new blogger with the same love of writing is a real spark. New is a relative word here - someone new to me may have been blogging as long as I have, with their own ecosystem of networked commenters and subscribers well before I lucked into their writing.

John Spencer is a writer I can relate to. He's more a writer than a blogger and I'm part way through his book, Teaching Unmasked. I found him via Michael Doyle, who I found via Clay Burell, who ... well,  I can't even remember how I connected with Clay any more. John is an honest, open breath of fresh air and he touches on ideas that resonate with the part of me that is a still a classroom teacher. And the writing .... well, it makes me nod my head in agreement ¹, it makes me cringe when the story holds up a mirror to my own practice ² and then a nugget of new insight will burrow back into the recesses of my brain and make a cameo appearance in my consciousness at a totally unforseen but entirely appropriate moment ³.

¹ It's not that students are tired of learning at the end of the year.  It's that they're tired of school.

² I ripped into students who made mistakes or who were acting "lazy" when in fact they were scared or confused or bored.  But the good news is that there's a solution.  Apologize.  Humbly admit that you've been a hardass and watch how people respond.

³ On an intellectual level, I wonder if I hold on too tightly to ideas.

So if you haven't added a new voice to your Reader, and you're longing to hear from someone who doesn't just focus on the highlights, who isn't obsessed with redesigning education from the ground up except for in his own classroom and can say things better than I can, head over to John's blog. Don't say I sent you because apart from a couple of comments, he won't have a clue who I am. 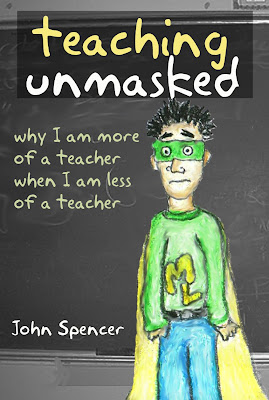 2 thoughts on “When Someone Else Says It Better”