I enjoy Lisa Neilsen's blog but worry when I read words like this:

There is less tolerance for educators who do not believe it is their responsibility to move their teaching out of the past. Those stuck in the past... those who are not developing their own personal learning networks... those not taking ownership for their learning... are doing a great disservice to our students and themselves. In the words of leadership expert Jim Collins, these are the people that those who care about student success may want to advise to just get off the bus.

Not that I disagree with the sentiments but its tone is hardly encouraging to educators who are still tentative in their overall use of technology. What was that old saying about honey and vinegar?

Especially when teaching has become an increasingly complex job. I like to use the metaphor of a juggler with my colleagues, recognising that they already have a number of important balls in the air that they need to keep in motion. To take on a new ball, something needs to be done about the ones already airborne - either by taking one out of action or lessening the impact if it gets dropped. 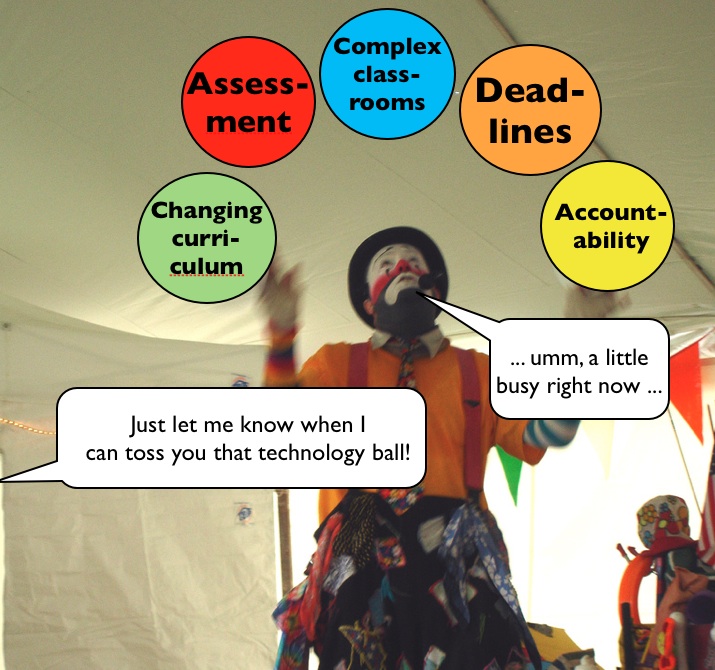 Telling my colleagues they shouldn't be in the job just because their technology ball isn't whizzing around at the same intensity as the others is not fair and is as tunnel visioned as those who would judge teacher's prowess on their students' test scores.