This week's maths focus was planned to be on time zones and I sat there on Sunday evening looking around for some web resources to help convey those concepts to my Year Seven class. For some reason, as I stared at the time zone map from worldtimezone.com, my mind wandered back to a conversation I'd had with a colleague about my favourite reality TV show Survivor. (Everyone has a weakness - cigarettes, gambling, golf, chocolate .... Survivor!) Sensing that maybe I was a reality television fan, she had also asked if I watched the show The Amazing Race. I've only watched the show on the odd occasion but her suggestion bobbed back into my mind as I pondered a hook, a reason for students to be exploring the concepts and the mathematics behind the world's time zones.

So, in my typical style, I started designing a challenge that would blend time zone differences, travel times and choices that involved time calculation. I started by finding an easy to read Episode Guide site where each season had each episode neatly summarised in a paragraph. I decided that the focus would be just on moving around the world and gave Season One a try as a test run. The first episode had the contestants starting in New York and flying to Johannesburg in South Africa, so I used Fare Compare to find flights starting today that would fit the bill. Even though money isn't a focus at the moment in our Mathematics, I figured it wouldn't hurt to add the ticket costs along the way as well. I also thought that getting the kids to use Powerpoint as a tool would be an easy way to standardise everything, making each slide a leg of the challenge. 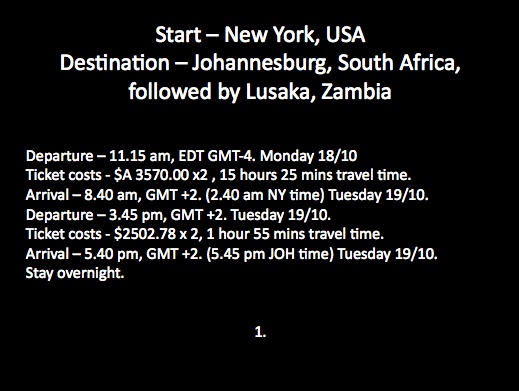 So, part of this Amazing Race is work out the best choices to get from one destination as outlined by that particular season to the next. You can see that my earliest choice for a flight was an 11.15 am flight from JFK (I know that this isn't quite how the show works but this provides the decision making element). I recorded that plus the GMT zone, the ticket costs (Fare Compare automatically converted the costs into Aussie dollars but if I used another site or a particular airline site, then there is always the handy XE Currency Converter site) the time spent travelling including time spent on stopovers, the arrival local time with a converted time for the originating time zone. That would be plenty for the students to play around with.

So, the students are in teams of two or three and are aiming to cover at least two legs per day. After each leg, the team must program in an overnight stay before hunting for the next flight to the next destination. This may turn out to be too ambitious on my part but some teams covered three legs in today's hour. There are two "prizes" on offer - one for the first team to get through the designated season with correct calculations by week's end, and a second for the team that makes the best choices and solves the season in the least fictional time.

In general, the kids really got into the task although a number needed help in navigating the complex Fare Compare site. The tendency was to punch the two destinations in and take the top result. With the premium being on saving time not money, students had to be shown how to sort the results to give the shortest flight times and make better choices. After all, no one wants to spend ten hours in one airport and seventeen in another before arriving at the required city 37 hours after departure just to get a bargain basement fare when a direct flight will get one there in under fourteen! We'll see how it goes.