Personally, both the K12 Online Conference and the Edublog Awards are held at shocking times of the year. I couldn't possibly be any busier when both events are happening. October sees us gearing up for the sprint to the end of the year - planning, writing reports and then November hits like a ton of bricks with the finishing up of reports, Year 7 graduation prep, end of school year events and would you know it, I didn't get to even nominate anyone at all.

But tonight I went to see who had made the final lists and see if I would throw a vote their way. It also shows how much I'm out of the loop when there are so many nominees that I've never come across before - so unfortunately, voting sometimes is a case of who I actually recognise! Anyway, here's the categories I voted in and who I reckon should get to display the funky winner's badge in their sidebar. (Like anyone really cares what I think and will be influenced by my choices!)

Best Individual Edublog 2010 - a few good choices here, but I must admit that I have really enjoyed reading Michael Doyle's Science Teacher blog.

Best individual tweeter 2010 - for me, has to be @deangroom. I am a haphazard and infrequent user of twitter but Dean's mix of personal observations, humorous banter combined with quality pointers to links of interest make him the best out there. Plus he'll often @grahamwegner me, which helps make me feel included and semi-useful.

I don't really like group blogs so I gave them a miss and didn't recognise a n y o n e on the new blog list. I skipped through the class and student blog noms because they made me feel guilty that I haven't fostered my own class blog and student blogs as much as I should have this year and blew off the best resource sharing blog while I was at it.

Most Influential Blog Post 2010 - I picked Lee Kolbert's "I'm Not Who You Think I Am." Regardless of which side of the fence you sit on philosophically, this post really opened up the floodgates on debating about what a quality teacher does or is allowed to do. Much more than some of the deliberately provocative options on this list, Lee at least put her heart out for the world to see and was truly open about what she does. Very cool.

Best Teacher Blog 2010 - At the risk of being narcissistic, I voted for myself! Thanks to Dean Groom and Tomaz Lasic who nominated me (and anyone else who may have quietly done so) and this way at least I'll have one vote. Plus this gives me an excuse to display the badge below. Hey, I'm actually proud that every year since 2006 (with the exception of last year) I've been nominated for something. I've never gone close to ever winning but ....

Best Librarian blog is still Doug Johnson and then I skimmed down to the lifetime achievement award. A few worthy nominees here, but this year my vote goes out to the Blogfather himself, Will Richardson.

So, that's it. Back to admiring my nomination badge .... 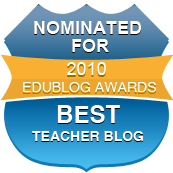