Following a tangential thought after reading this Stephen Downes' post in OLDaily.

I'm not much of a futurist but I certainly wonder about the impact of the corporatised  internet within the next decade on people like myself who have found a niche on the open web. The uncertainty surrounding delicious is certainly a indication that learners need to be nimble and adaptable in order to keep their free ranging options open. I can see a future where teachers who haven't started blogging and sharing resources won't need to bother because self hosting and options like Edublogs will be too difficult to access, audience too difficult to find and networks too hidden behind service barriers. Facebook and Twitter will set the blueprint for short drips of information, inane games and "Likes" that strip meaningful connection back to quick wordbites and image overload.

Net neutrality is a big deal. We may look back at the Web 2.0 phenomenon as an exciting period where anyone could publish to the web while still maintaining control and integrity. It may be that if I have say, Bigpond, as my internet provider, I can only get the Bigpond filtered and ratified web. More open independent ISPs may become niche expensive services as the mass population weaned onto a diet of of Apple and Android apps, or social media one stop shops find that cheap, corporation sponsored internet is all they know or care about. Where one can actually find an authoring or sharing site, one will need to sign over all intellectual property rights to the megawebcorporation overlord before one can even say "Hello World." All of this digital citizenry stuff could well be beyond the skill set of the average educator. Don't worry, Google will provide a set of online lesson plans for us to follow and then the kids can add another sponsored widget onto their online portal.

We can only hope that human ingenuity will prevail over the insatiable need for profit. Facebook has a powerful grip for now, but as soon as users decide that another service is newer, shinier and cooler, then that particular walled garden will need to re-invent itself (like MySpace) or face irrelevance as the users flock to the new service. But the trend towards capturing audience for the benefit of advertisers is now everyday with the public so used to social media games, getting free virtual dollars for favouriting consumer products and connecting to vague acquaintances. The KMarts and Targets of the world try to cater for everything a consumer would need in one place - there is a huge possibility that the online world will adopt the worst aspects of the offline, face to face world where giant corporations control far more than they should. I'd like an internet that is more like a countryside dotted with quaint, unique little hamlets and villages than an internet with a few major cities and miles of soulless freeway. 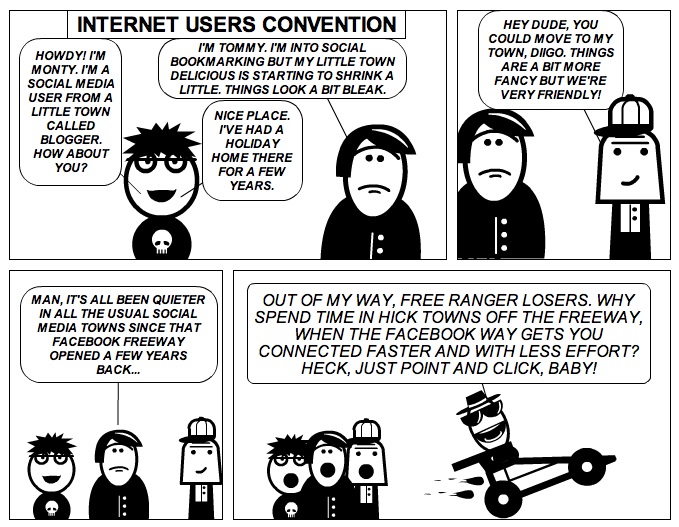