I'm sure that people who friend me on Facebook are invariably disappointed because I don't actually DO anything on there. I have a handful of people on my list who I was friendly with during secondary school but I've resisted adding anyone that I recognise in the same way I've avoided going back to any school year level reunions. I'm just not that interested in linking back with people who weren't interested in me at that point in my life - thirty years on isn't going to change that. Interestingly, I enjoyed hanging out with kids the year level behind me more than my colleagues in the Class of '83 and it was from one of those connections (a guy called Ian "Bushy" Martin) that I ended coming face to face with a much younger me in the labyrinth that is Facebook. 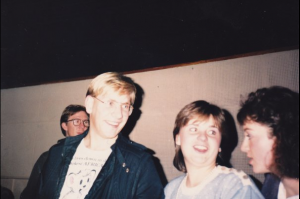 I'm figuring that the year is 1986. Please note the very eighties jacket with the trendy Kimba The White Lion t-shirt. The photo was taken at the Woodville Town Hall at a gig that featured the cleverly named "Punt Kaybal", a band that featured the before mentioned Bushy Martin on drums and if my feeble memory serves me well, was the vocalist as well. Now I know that I don't really have the right to poach a copy of this image as any copyright or intellectual property belongs to Facebook itself, thanks to the user agreement that signs those rights away.

Now if this image can come back to me from pre-web days to haunt me and be beyond my control, then it reinforces what I say to many of the parents of students in my classes over the past couple of years. Just because you don't let your child use Facebook and manage to prevent them creating and maintaining a profile on there, it doesn't mean that they aren't on Facebook somewhere.