Being here in Australia, I didn't pay too much attention to the Vancouver riots after the NHL finals loss of their local team until I read about the role that social media played in the events of that day on Stephen Downes' OLDaily. His links got me interested, and over the last few days I've followed numerous other links and sought to make some sense of the vast array of views and counter-views that are online. So, here are some tenuous thoughts...

In an age where we are concerned about privacy and the role that closed circuit video has in our society for catching wrong doers, it is ironic that people think nothing of the potential surveillance in people's hands and pockets in the form of their smartphones. So, when things swung out of control in Vancouver, those "caught up in the moment" never considered that their actions captured and uploaded to the web might come back to bite them on the backside. One of the sites that Stephen points to is run by Captain Vancouver, who combines the actions of naming and shaming real people behind the protection of an online alias. Here, commenters sway between admiration for this new form of online accountability or the reviling of an online vigilante squad caught up in their own moment of "seeking justice". I'm still not sure where I sit because some of the actions of those participating were so moronic and lacking in any moral fibre that seeing some form of justice dished out seems to be perfectly defensible. But then the comments take their own dark turn and the Captain's intents are being hijacked by others and turned into racist, misogynist, homophobic attacks that undermine the moral high ground that the site's owner wants to be able to maintain.

In a lot of ways, the rioters who posted about their own antics on Facebook and Twitter have messed in their own nest, and are reaping the consequences in more ways than they ever could have anticipated. It is a fascinating insight into mob human behaviour. People behaved as if they were truly anonymous, unleashing their most inappropriate and hedonistic actions on property, public and private - and what I've viewed across the web, there is certainly no stereotypical rioter. In fact, most of the names and faces that crop with regularity seem to be bright, ordinary people - kids still at high school, people working for charities and university students. Did they fail to notice the array of mobile phones held high recording moments for posterity? Except posterity is now a Facebook profile, or a Twitpic link or a YouTube upload. And are the bystanders whose footage is now being used in the digital witchhunt just as guilty for standing by and being part of the rebellion? Or were they adopting the position of citizen journalists?

So the rioters had their fun, the police dispersed them eventually and the mainstream press filed their reports. But many net savvy citizens were very unhappy about the way that individuals had not only trashed their city but gleefully shared their antics for anyone in the world to see. So, the various shaming sites I mentioned before started to spring up. Some merely had the goal of posting clear pics of persons of interest asking if anyone recognising them to contact the Vancouver Police Department.

Just five days after the June 15 riot that plunged the Canadian city into three hours of chaos, police had received 3,500 e-mails that included 53 videos, 708 photographs and 1,011 hyperlinks to social media sites such as Facebook.

Now police have warned outraged residents to avoid using social media to exact vigilante justice. Authorities "are asking the public to resist the temptation to take justice into their own hands," the police said in a statement.

Others, like Captain Vancouver, decided that some meticulous research across varying forms of social media held to some personally defined standards would be the way to ensure that these everyday people were held to some form of justice. These sites weren't buying the "I was caught up in the moment" reasons offered by some identified and also felt that the court system would merely give out a "slap on the wrist" for anyone who was arrested anyway. But there is always the risk of getting the facts wrong, as the police found out.

So, maybe not quite uberveillance but another cross-pollination of mobile devices combined with social media mixed in with old fashioned mob rule produces results that spiral and viral way beyond the control of any individual whose profile can be matched. I mean, what are the odds of wearing the same outfit when stealing from a store as on your social media profile? And someone is ready to mix and match the whole concoction together in another example of internet remix interactivity. 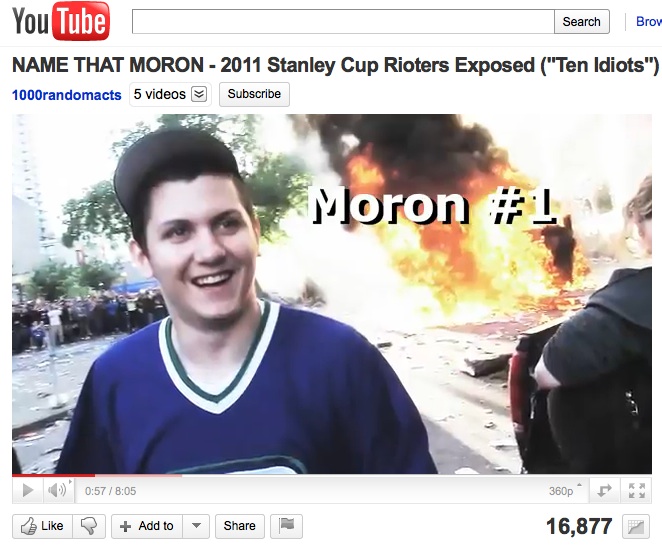 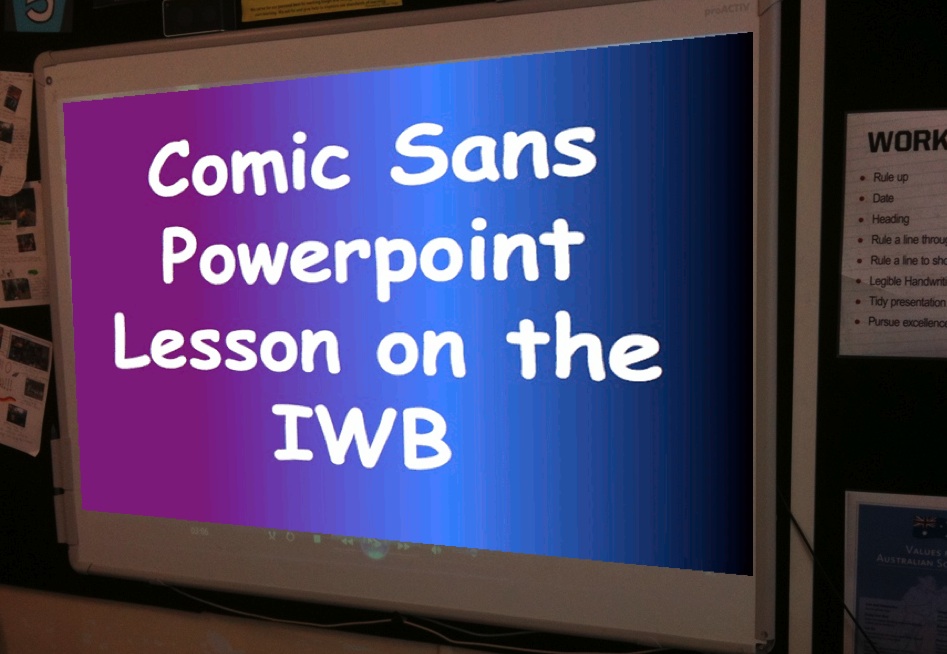 This idea sparked from a claim in the staffroom the other day that Comic Sans helps kids learn. Who would have thought it?

Last year, I bought a copy of Call Of Duty: Modern Warfare as I thought it would be interesting to play a game aimed at adults and in a genre that I would not usually gravitate towards. We have a Wii system and I hooked up the Wiimote and nunchuk ready to get into video warrior mode. I think I played it twice before getting bored and nauseated by the motion caused by my unsteady gameplay. A couple of months later I traded it in alongside a few other disused games of my son's in order to buy a DS Pokemon title for him.

But unlike, many of my teaching colleagues when I heard kids in the upper grades talking about playing COD at home, I knew they weren't playing a virtual fishing game. In Australia, all of the Call of Duty titles carry a M 15+ rating. Interestingly, this seems to be used a guide rather than as a rule as I have heard kids casually tell me that "everyone has this game" and "my parents bought this for my birthday". I'm pretty sure that many of the pre-orders for the latest installment Black Ops were from the 13 years and under brigade with either very open minded  or possibly naive parents (maybe a combination of both) collecting the coveted goods so that bragging rights would be in place for school the next day.

Australia has a mixed approach in rating video games. On one hand, Australia is seen as quite liberal with the Call of Duty games available without guardian approval or assistance from the age of 15. In North America, the ESRB rates the game's starting age at 17, in Britain the age is 16 and Europe's PEGI sets the bar at 16 years of age. But there is also a large list of games that are banned here that can be bought under different rating systems elsewhere in the world. So, are there dangers in allowing younger primary school aged students access to these more mature themed games?

A blog post by Carlton Reeve, highlights some of the potential dangers:

I think it’s right to be concerned about the underage use of games like Call of Duty (COD).  Increasingly parents are succumbing to perceived peer pressure and allowing their children to play these games because ‘all their friends are.’ I know lots of parents that have decided it’s okay.

I think there are a number of reasons to be concerned.  It’s not just the gratuitous violence that risks becoming normalised, COD and alike are riddled with bad language, sex and other adult themes.

It’s odd that many of us regulate our children’s access to TV but feel that the violence presented in games is somehow different and therefore harmless.  But visual realism in these games is increasing.  What’s more, it’s participatory.  COD Black Ops has a gruesome torture scene, Modern Warfare 2 has terrorists murdering innocent civillians in an airport, and the player can join in.   Computer games present violence in the same manner that porn shows sex – entirely casual and inconsequential.  I can’t imagine many of us would be comfortable with our children watching 18 certificate films but the content in video games is basically the same.

Killing is the point of these games – it is relentless and mindless.  But that might not be an issue to those of us who know better.  There is no evidence to suggest that playing violent video games makes well-adjusted players more violent in the long term but there is ample research that shows a rise in aggression and drop in empathy immediately after playing.  Current studies suggest that violent games can exacerbate underlying psychosis, that is, if you have a tendency to be violent, first person shooters will make it worse.  Thankfully most of us aren’t psychopaths and by our early-mid twenties most of us have settled into our skins.  Young people are still ‘solidifying.’

One of the possible solutions in making these sort of games less accessible to the under 15's of Australia is the elimination of the MA 15+ category and the creation of a new R 18+ category where only an adult could buy games of that classification. The logic says that it would be less likely a child could talk their parent into buying a R rated video game as the internal alarm bells should be ringing clearly in that responsible adult's head. But I still continue to be amazed (in a negative sense) at the sort of content that students I have known over the last few years have had exposure to with their parents' knowledge and blessing. At times, I feel very conservative!

Many serious adult gamers want the kids out of their space as well. There is a wealth of reading at the Australia Needs A R18+ rating for video games website, where the reasons for such a move are clearly outlined. And interestingly, my own state is willing to go it alone in such a move with a decision about dropping the MA 15+ rating for the R 18+ due in July. Will it change the behaviour of video gamers under the age of 15? We'll have to wait and see if the talk of COD gameplay becomes nostalgic around the schoolyard.