CEGSA had its rescheduled annual conference on Saturday, and I attended this year as a regular participant with no responsibility for any presentations or workshops. I even dressed casually which backfired when the committee decided to issue awards for the 2010 Leading Lights and I got photographed with president Trudy Sweeney wearing jeans and a hoodie! Anyway, here are a few paragraph summaries of what I decided to attend.

Opening Keynote / Tom March:
The concept of the Webquest is not dead even though some leading edge educators might think so. Tom March, along with Bernie Dodge, is one of the co-creators of the concept that seems almost quaint now in the era of social media. But as Tom points out, it is important to not keep chasing the shiny new toys just because they seem exciting and new, and the webquest can be re-invented for the Web 2.0 era and push students into higher order learning. 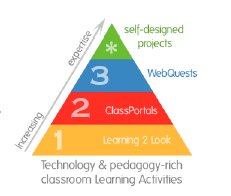 But the point that Tom made that resonated best with me was the concept of "grit" in learning. Engagement is one thing but meaningful purpose and a willingness to wrestle with learning and persist through to new understandings has never been more important.

Get Me On The Net / Karen Butler:

I really enjoyed the fact that Karen is one of those educators who doesn't let technology issues become an excuse for not pursuing relevant learning for her students. She started by apologising for being nervous and unsure of how her presentation would go. She was surprised that she had a relatively full room, expecting only a handful of audience members. She needn't have been either surprised or nervous as her presentation was excellent.

She showed us through a number of examples of her students producing short films on a wide range of contemporary issues. Karen really showed us the power and flexibility of new media in order to redo work to get things to a personal or accepted standard, with the video footage including claymation, remixed digital content as well as filmed footage by the students.

The second half of her presentation wrestled with issues that many of us championing technology in the classroom are familiar with - excessive filtering, making do with old and limited equipment, slow school web connections - but with a commitment to keep pushing to be innovative with whatever can be accessed. A really great presentation from a dedicated educator.

Penny Collins / To Google and Beyond:

A jam packed 45 sojourn through the many iterations of Google search from a recent Google certified teacher. Enthusiastic and informative and a few new avenues of attack the next time I go searching.

There was also a keynote from Margaret Lloyd on ICT and the Australian Curriculum after lunch, followed by a session using iPads from Christine Haynes, plugging Apple's own Challenge Based Learning. (Does the world need yet another tech company producing ts own curricular or inquiry approach?) So, it was probably fitting and telling that my final session was on Oracle's ThinkQuest run by the very capable and enthused Tina Photakis. Overall, a day well spent and the one day formula seemed to mean that all sessions were all worthwhile. Next year, it will probably be time for me to step up and offer something back to the local edtech community.