So I finally sat down and watched the KONY 2012 video tonight. A colleague had pointed me towards it earlier in the week just as it was starting to go viral but my urgency to check it out was tempered by a post on ShortFormBlog that hinted that it might be wise not to take the video as pure fact.

I'm not the only one intrigued by the clever use of social media to tell this story. KerryJ reacted in a similar fashion to a number of my work colleagues while Daniel Stucke mirrored many of my personal reactions to the whole KONY2012 issue. How we bite on a well crafted, emotional message either shows our own feelings of compassion, levels of cynicism or the very human need to feel like we can make a difference in or to the world. It is also a measure of our digital literacy skills - the skills that we are (supposedly) teaching to our students.

By mid-week, the backlash against the video started to show in mainstream sites. The Atlantic was particularly harsh:

Kony 2012 is so seductive for precisely the same reasons that make it so dangerous. The half-hour video, now viewed 40 million times, sets viewers up for a message so gratifying and fulfilling that it is almost impossible to resist: there is a terrible problem in the world, you are the solution, and all you have to do is pass along this video.

I find it interesting that it seems to be mainstream news media outlets that are leading the pushback. Effective digital literacy would include questioning their motives as well as the Invisible Children organisation who produced and posted the video. Could it be that they has been caught napping on a very important issue? Could it be that this video treads into what traditional news media might see as their turf?

The only other thing that I would add as an average citizen of a privileged country is this. Before Monday, I had never heard of Joseph Kony or the LRA. The sheer momentum that this video has produced has raised my and the millions of viewers worldwide's collective consciousness. Whether we support or dismiss the goals and actions of the KONY2012 movement, or the target of their campaign, one thing is certain.

Now we all know.

NB: Seth Godin analyses the video from a social media perspective here. And I highly recommend the ShortFormBlog's even handed coverage of the unfolding events. And as a final bonus, check out the graph below from Wikipedia edits on the Joseph Kony page as people jump on board to rewrite the definitive article on the central figure in the whole saga. 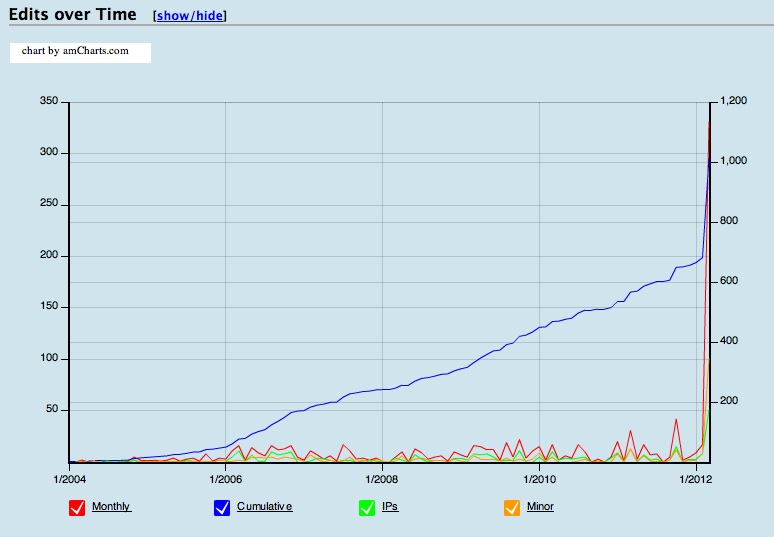