I ran a PD session today as part of our weekly staff session focussing on awareness raising around online tools for professional self-learning. I focussed on the potential of Twitter, Diigo, delicious, Google Reader and touched on Edmodo. It feels weird to be introducing these tools that so many in the edtech field see as standard fare that has been around for quite a while and I know that many on my staff have known about these tools but still many regular classroom teachers are unaware of the potential growth and access to great ideas and resources that social bookmarking and feed aggregation can produce.

Anyway, I tried to strike a balance between the show-and-tell that is required with some choice and free time for my colleagues to explore. I used Dan Meyer as an example (again) as his output and sharing is second to none, and he really comes across in his videos and blog posts as someone that everyone can like and relate to even if he is operating at this hyper-extreme productivity level of video production, blog posting and curriculum development that no one else I know in my day to day life could keep pace with. I showed a couple of my dy/av videos and pointed out how and where he shares his thoughts, ideas, resources and insights across the web before offering them a challenge based on his own fingertip analogy from way back in 2010. If you subscribe to Dan, you may remember this one:

Let me urge you to consider that question under the following fictional constraint: every time you tell a teacher to download a new application or set up an account with a new web application, the teacher loses a fingertip.

Bracket, for a moment, the grossness of the scenario. I'll let you decide how the teacher loses the fingertip. The point is that y'all don't understand that you're a bunch of freaks. Someone links up some new online Photoshop knock-off and on muscle memory alone you're entering in your e-mail address and a password and clonking away at your new toy.

Real people aren't like that. And you give them too much grief, sometimes, for their unwillingness to sign up for ten different web apps to service ten different nuances in their learning which you have judged to be equally essential.

So: fingertips. Be careful here. I would give the fingertip off my right ring finger for Google Reader. I would sacrifice a second fingertip for Delicious.

So, with the metaphor firmly in place, I figured that bribery and encouragement works better than guilt trips about how teachers need to get with the program and be connected for their students' sake. I threw the following slide up on the screen: 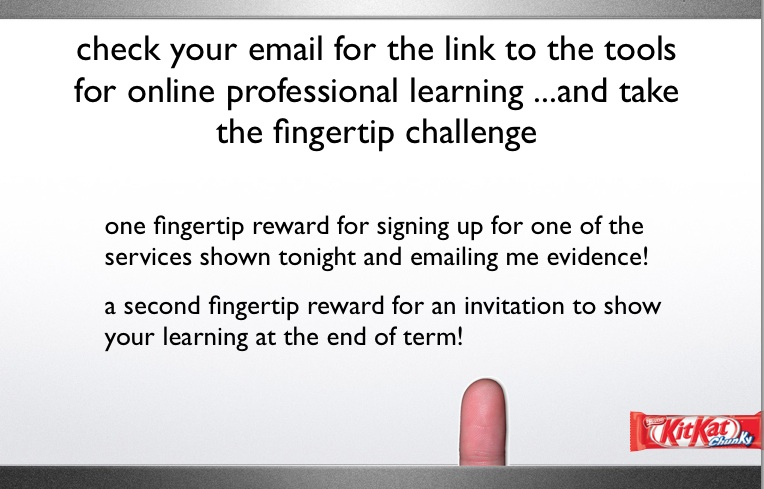 The reward is a chocolate like the KitKat pictured - as KitKats can be broken into fingers (get it!) - and I remarked that I could potentially be up for an expensive purchase of choccy bars as staff signed onto the tools and tweeted or friended me as evidence they were on their way to embracing connected self-learning! A colleague then said that I maybe should have wagered with someone else that I could raise thirty or so new followers on Twitter in a day, and I could have funded the reward!

So, Dan, I'm sorry if I keep mentioning you and your work from a year or so back as a starting point for others but you are an ideal role model because you weren't a tech head like the majority of us whose day job involved tech integration into student learning. But if I tell the whole story that you show on your website that shows where you've gone since those days as a beginning mathematics teacher, they may well be overwhelmed and intimidated into not giving this a go. But if someone like me is making a useful contribution, then it can't be that hard.