Walking into a vacant classroom and having a look around (even without the students being there) can tell you a lot about the sort of learning that goes on in there. How the furniture is laid out, the posters and work samples on the wall, the artifacts and resources available all tell a story of what is valued and what is possible for the students assigned to that classroom.

I'm picturing a couple of classrooms (fictional but typical of some that I have seen)  in my head as I type. I'm not going to identify when, where or who - but one I'm thinking of had class desks in a haphazard array, with very little displays of anything on the walls. The teacher's desk takes up a sizable portion of the corner of the room and is a dumping ground with mounds of worksheets, student workbooks and newsletters threatening to slew off onto the floor. The laptop trolley is left open with laptops stuck in on varying angles and power chargers dangling unattached. The philosophy espoused by the teacher is of student choice but in a very unstructured way - the kids determine the seating arrangements but personalisation is catered using a worksheet driven approach. There is freedom but very little responsibility. There is choice but no structure. Nothing on the walls indicate that nothing is important enough to showcase - or that the teacher doesn't want to find the time to get any displays happening. Maybe, this teacher clocks out as soon as possible when the students leave so there is minimal time left to try and create an inviting environment. What sort of learning is possible in this space?

The next classroom has sections divided off for specific purposes. There aren't designated seats for specific students to sit at but a central spot within the classroom is set aside for whole class instruction or for students to sprawl out for reading or doing partner activities. The room has different furniture options for the students to use - some low seats, cushions in a corner, some higher stools at a higher table. Your eyes are drawn to the various areas and there doesn't seem to be a teacher's desk either. This speaks to a different commitment to enabling student learning - it is apparent that not all children can be involved in the same activity as a whole class easily.

We had Lisa Burman speak to our staff on Thursday in our lead up to the start of the school year. Her focus in the morning session was on the strategic design of learning environments and she shared examples of classrooms where the teacher had re-designed the layout to reflect a changed approach to pedagogy. It certainly provoked a flurry of activity in the afternoon when teachers headed to set up their classrooms for the start of the 2013 school year. People were keen to "de-clutter" and "re-design their learning spaces" which meant that her message about the learning space being an accurate picture of a teacher's approach to learning hit home. Some teachers who had already been strategically thinking in this way and had started their journey of re-examining what their learning space should be were visited by those who hadn't thought too deeply about these things before. Others who looked at a space and only saw one picture of how the classroom could look asked others for their opinion and vision to break free of their own entrenched comfortable habits. Hopefully, no one was misguided enough to believe that the simple re-design of a classroom meant that their teaching practice would be transformed. But thinking consciously about this is an important step towards examining one's own teaching practice.

I thought back to some of the teaching spaces I have inhabited over my career. I've taught in transportables, open space units, traditional single classrooms, a former library complete with an upstairs annexe and a brand new BER "21st century learning" building at my previous school. However, it is what is done within those classrooms that is most important - you will find more about that in an old blog post of mine from 2006 titled Classrooms. However, I think that when you know what learning should look like for your learners, then the learning space design will be shaped in the best way to make that happen. 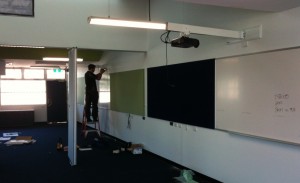 The family got back yesterday from a few days down on the Fleurieu Peninsula, basing ourselves at Goolwa. This is the third time in three years and it really is a nice part of the world to kick back and take things easy for a bit. We were looking forward to some nice weather but Wednesday was a bit cooler than expected so we changed our plans around a bit, trading in a day at the beach for a walk across the causeway to Granite Island at Victor Harbor, and to check out the Little Penguin centre on the island. 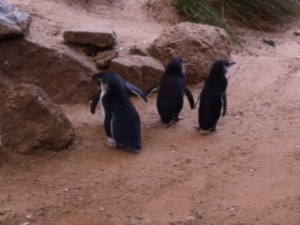 Recuperating little penguins from Granite Island at the Penguin Centre.

Here a small number of volunteers look after a small group of little penguins who have suffered injuries that prevent them from rejoining their colleagues in the wild. There was a feeding scheduled for 11.00 am and so we paid our money and shuffled in to see these little guys. The lady who came out to feed them their daily ration of pilchards was a passionate advocate for their welfare and shared a wealth of information about this unique bird with us, not all of it heartwarming. She shared with us factual information about their life cycle, how they spent their days fishing up to 50 km away from their burrows on Granite Island, returning at dusk to rest up before departing before sunrise to head out into the ocean again. I suggested to my youngest, Josh that we should sign up for the guided tour that night to check out the penguins as they came home for the night. I then got my next shock.

Ever since I can remember there have been little penguins at Granite Island. So going on a tour had been one of those things that I'd put aside for a future date - because there would always be another time in the future when I could do it. But the colony on Granite Island is in severe decline. Back in 2000, a census put the numbers of penguins on Granite Island at around 2000 - making good use of the over 200 human constructed burrows. Most of these are built into the cliff alongside the main road leading from the causeway around to the kiosk/bistro/souvenir shop putting their homes in very close contact with human activity. By 2011, that number had declined down to around 100 birds, but a recent 2012 census put the numbers to a really scarily low 26 penguins. So, the reality is that very few penguins can now be seen at dusk clambering out of the water, scuttling across the tram-tracked road and beating a hasty retreat to their burrow. When we went on the tour that night, we saw one solitary penguin make that trek back home. I had imagined dozens of them in my mind before being confronted with this fact.

The volunteers put down the severe decline in numbers due to a natural phenomenon - the New Zealand fur seal whose numbers in the area were on the steady increase. We were told about another colony of penguins (about 100) on a more remote island near Victor Harbor that has been wiped out by the fur seals moving in. The seals weren't being seen on Granite Island possibly because of the presence of humans, but were nabbing the penguins while they were out on their fishing trips. And based on the washed up penguin bodies, the volunteers concluded that they weren't being pursued as food but the seals were killing them as a form of sport, much like a cat kills birds sometimes, just because it can. The volunteers also said that something else unusual was happening with the Granite Island penguins. Normally, December and January are prime viewing times to see penguins before they headed into a two to three week feed up in preparation for the moulting season. The penguins hunt and consume enough fish to double their body weight so that they can survive a two week starvation period back in the burrow as they moult the old feathers and allow the new feathers to fully seal up their natural water proofing. But this year, they had headed out to sea two months early to start their fattening up process. Whether this was a response to their decline in numbers, no one is sure, but it is a sign that things are not as they should be. The little guy we saw waddling was certainly well into the gaining weight process.

So, it was good to do the tour while we still can. But there are a number of questions that pop into my mind. Is this a problem that can be helped by human intervention? Or is it just part of nature and we only care because this is a colony that drives visitors to a place? Why is that numbers have to drop to such a critical low before bigger bodies like local councils and governments take notice? I'm sure that the volunteers and researchers were waving the alert flag before now. And what about people like me who feel saddened now because it is in my immediate consciousness soon to be forgotten in due course as other issues vie for my attention and compassion? And what will the Granite Island colony look like next year when we head back to that part of the world for our family holiday?