We bought a new Xbox during the Christmas holidays, complete with Kinect. Apart from the bundled games, the first game my youngest son bought was NBA 2K13 as the house has sort of gone basketball mad over the last 18 months. Despite my interest in games, I have never really gotten into any serious games.

The first thing I like about this game is that is a sports sim. It may well be a product of  my childhood where I wasn't given any opportunity to play any form of competitive sport until I was sent away to boarding school at the age of twelve. I had just started wearing glasses so I didn't play any of the team sports where they might get broken - football being the one sport that I enjoyed watching but was too poorly skilled in and too terrified of to participate in. Maybe I had very little physical skills to start with or because other kids had spent their childhood chasing and hitting balls around ovals and courts, by the time I had become a young adult my keenness to play sports like football and basketball were tempered by a huge lack of coordination and strength. So, a game where I get to be the supremely talented athlete appeals to me on that level, satisfying that part of my psyche that has been undernourished from any sporting recognition throughout my life.

A week or so after getting the XBox I bought a few other games for myself - Forza, the game that satisfies those car lovers who couldn't afford the type of machinery shown in the game in their real life (or couldn't afford to drive in the same manner even if they could), Madden NFL 13 and NHL12. All are great games and really fun to play but they still have fallen by the wayside when compared to 2K13. Driving fictional cars is OK in small doses for me, Madden is great but my reactions are a bit slow and being Australian means that I don't have an innate understanding of the intricacies of the American gridiron game, and NHL is very hard to play when you have no idea what you are doing.  Meanwhile, I understand basketball. The last two years of watching my son play every Friday night and Saturday morning has rekindled an interest in a game that I haven't taken a lot of notice of since Michael Jordan retired.

So I have started to spend a lot of free time on this game. It is the single biggest reason that blogging has gone from a crawl to a almost-standstill on this site. I don't watch a lot of television but I've been putting off watching the stockpiled episodes of series that I do like (Treme, Boardwalk Empire, Luther) in order to get a fix of NBA fantasy. So, I'm trying to unpack here why this game has affected me more than any other, why this has been my hook into gaming (for the moment) and why I am prepared to spend my free time (which isn't a great deal after family and work commitments) on this digital fantasy.

The first part of the game that grabbed my attention was the MyCareer mode. In this, you create a player giving him the attributes, skills and looks you want before letting him loose in a Rookie game where he will be picked by in the Draft by an NBA club. Again, a psychologist could probably have a field day looking at gamers' NBA avatars and comparing it to the reality hunched over on the couch. My player has my own name,  long shaggy hair (probably because my own hair is thinning and unremarkable), multiple tattoos and is 6' 7" and extremely athletic. Make of that what you will! Basically, you then play games with the club that recruits you, seeking to improve your scoring and efforts on defence to earn Skill Points (or Virtual Coins on XBox live) which can be spent to upgrade skill areas which make you a better player who then scores and defends better and earns yet more Skills Points. Continuous improvement is the goal - and achievements along the way showcases that improvement. You get offered endorsements, make the front page of Sports Illustrated, make the starting line up, get invited to the All Star game (definitely not achieved yet) and hopefully play on a team that makes it all the way to an NBA championship.

So, this becomes very addictive because I am playing out a career. After a while, I realised that I wasn't very good and wondered how to restart the player I had in a new career. This actually led to me looking online for Xbox gaming communities and forums where I could hopefully gain some better insight to get some better results. YouTube had gamer created tutorials showing various move options - so I adopted a couple that I thought would be within my capability and took to the virtual practice court. In my bid to become a better player, and looking for ways to fast forward the process, I found an answer on a forum that offered a quick fix - using Microsoft XBox points to buy Virtual Coins. We had some spare points after Josh had bought some small games on XBox Live using a $25 1500 Points redeem card so in a bid to be a player who could at least sink some basic shots, I actually spent some real money to improve my player. Not a lot of money, mind you, probably $5 or so but the point is that the desire to become better had me parting with actual dollars.

YouTube also revealed a way to create the perfect player in terms of maximum skills by accessing unlimited Skills Points. So I quickly had to learn how to format a USB drive to transfer files from the XBox hard drive, how to download some pieces of hacker freeware, and how to modify the save files and profile files so that it was possible. This was fun but felt like cheating so I applied the hack to a new profile and created a fictional player with over a billion Skill Points and upgraded him to the maximum possible in every skill category available. It was still my slow reactions and gameplay choices happening but I could now pull off many more ambitious shots with this character and be able to achieve the Career Achievements more readily. Interestingly, I have barely used this character but have spent about 90% of my time on my first MyCareer player. The longer I play, the more I learn about how some choices in the past would have improved my progress. I made my player 26 years old as a rookie (subtracting twenty from my current age) but on reflection should have made him 20 as now my career will peter out six years earlier than what could have been possible.

One of the important milestones is to become a starter, one of the five best in the team and the best in the team at your chosen position. Here hindsight shows that I made some poor choices that led to diminished opportunity. Several years into MyCareer, I had been playing well for the Atlanta Hawks and had reached the end of a season playing well off the bench. I was a free agent able to court offers from several teams interested in my talents - and three of them were offering to make me a starter. One was the team I was in and the one I should have stayed with as I already knew the style of play of the team but again, something from deep from within my brain was attracted to the offer from the Chicago Bulls. As the whole concept of 2K13 is about playing out the fantasy of being a premier NBA player, being a starter on the famed Bulls was too tempting to resist. But this fictional Bulls team were hard to play with, Derek Rose wouldn't pass to me and the team had a mediocre year missing the playoffs. I tried to rectify the situation by requesting a trade to another team, the Warriors where my starter status lasted five games before I was relegated back to the sixth man role.

One of the features of digital games is the ability to do over when things go awry. I could and still can scrap this mediocre career with its mature age start, poor trade requests, uncapitalised starting roles and do over from the beginning again with a much better knowledge of how to play this thing to a higher level. But something addictive has me hanging onto this imperfect first effort - maybe it's the giving up of all those Virtual Coins, maybe it's all of those invested hours building this thing up, I don't know.

Or maybe it's the connection with my young son when we play head to head and the bragging banter about each other's MyCareer player. He plays this thing a lot differently. He's created over half a dozen careers already and never got past two or three seasons. He's started a team in the Association mode and filled it with AllStars and enjoys playing with an unbeatable combination of LeBron, Kobe, Chris, Dwight and Kevin. He doesn't do the same mode game after game, switching things around at an unsettling (for me) pace.

So what does this all mean? I don't really know - I am just unpacking the thoughts in my mind to try and work out why this game has unlocked my middle aged gaming focus, what are the elements of this game that creates community out on the web and why the fictional version can be more fun than watching the real thing. If anyone wants to play amateur shrink in the comments, your insight and linking to digital gaming in general is most welcome. Now if you'll excuse me, I need to go and suit up for the Lakers. 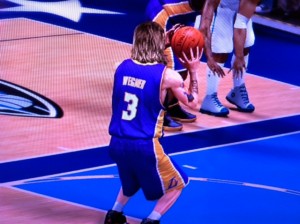 On the free throw line.