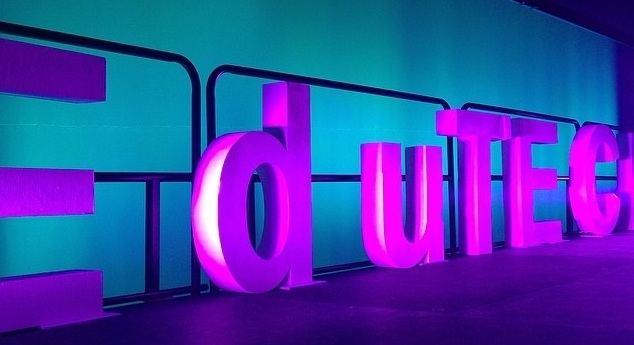 Photo by my colleague, Salma.

I am on the return leg home from Brisbane where four of my colleagues and I have spent the past two days at EduTECH. Personally I think that this event is misnamed because it is much more about learning with a focus on the rapidly approaching future than any particular focus on technology. Sure, there are tons of vendors in the exhibition area; some plugging products at odds with the pedagogies being espoused in the keynote sessions. But looking through the list of speakers shows big picture thinkers, education leaders with a story of change to tell and other learning focussed edu-celebrities all of who contrast with the invited speakers from the Gold class sponsors who have to subtly (or not so) remind us of their products or services in their addresses. But they help to pay the bills and keep the costs to us delegates within range of our school budgets so their presence on the program is a given. Without fail, it was their sessions that had the quickest "vote with your feet" factor in play.

For someone like me whose role is centred on change and enriching use of technology the list of "want to see" speakers was comprehensive. I loved Sugata Mitra, couldn't wait to hear from Jenny Luca and Judy O'Connell, enjoyed but felt a bit ho-hum about the big draw card Sir Ken Robinson, even though it feels like sacrilege to say so. (No death threats please, Ken Robinson fans!) Tom Barrett was great, Ian Jukes was fervent but captivating and where else could you face the difficult choice of either Ewan McIntosh or Gary Stager?

EduTECH is a bit of a keynote-fest but the subtle interactivity running through the online back channels meant you could peek into the minds of others as salient points were made in the Great Hall or Plaza Ballroom. During Ian Jukes' closing keynote the #EduTECH hashtag stream reached over 10.5 thousand tweets and retweets. That's a lot especially when I can remember conferences a few years back where you would be lucky to have 20 people in the flow of conversation. It was really interesting to see my colleagues all at varying stages of engagement with using Twitter as a tool for learning really embrace the interaction and the widening of the learning experience. They were truly experiencing the well worn phrase "The smartest person in the room is the room" and certainly, not on a scale that they had experienced before.

Sugata Mitra was interesting to me because of his research based approach to his work and how that influenced his conclusions. The big message that came through for me was about collaboration and students learning together. There were images of large screen computers with flexible furniture to facilitate students using the screen together to collaborate and to de-privatise the learning - a push away from the concepts of 1:1 devices. He talked about optimum learning being on the edge of chaos.

I must admit that I made the choice to make a early exit from the Vice President of Microsoft Education's keynote as his message seemed to be leading down a well trodden path that I've seen enough times before, and not even find out what the gentleman from Intel planned to cover. That was fine, plenty stayed to listen and I wanted to connect with educators that I knew were here. Quite a few schools from South Australia had teams in attendance and it was great to connect with other colleagues in the process of enacting positive change. It was also a chance to meet a few more people who I've interacted with online over quite a few years. I had Jenny Luca sit a row in front of me (she made an interesting comment to me about me being someone who seemed to have retreated offline, a very true statement that requires more thought on my behalf) and I ran into Judy O'Connell in the exhibition hall. I ran into Tom Barrett again but we've crossed paths quite a few times over the last few years but it was my search for Sue Waters that would prove to be most elusive. Sue is someone who I have known online since 2006 when she was doing podcasting and other interesting stuff as part of her TAFE lecturer role. When I saw her name in the Twitter stream, my mind flashed back to Skype chats with cutting edge thinkers like Alex Hayes, Sheryl Nussbaum-Beach and Clay Burell. Sue is now extremely well known as an integral part of the Edublogs team, where she gets to do what she enjoys most in her own words, helping others. I think that Sue is one of the most awesome people going around and it was totally worth the missed crossing paths and "Where are you now?" direct messages on Twitter to talk to her face to face ten minutes or so before the closing keynote. A funny side note is that Scott, one of the WGS teachers with our group, unwittingly met Sue the day before when he was searching for a way to charge his fast draining phone and offered to lend him a cord!

Both Ewan and Tom were excellent in their presentations with Ewan's thoughts on tensions and leadership being particularly relevant for me and my current headspace in my recently resumed role. Before we left, I set up a Virtual EduTECH page on our new staff blog that embedded the #EduTECH stream to encourage interested staff to follow along. Before we left on Monday, my principal Frank had the page up on the flatscreen in the staffroom to help pique interest in what we were participating in. My task is now to curate links and videos from the important speakers so that the team who went have some memory triggers to help propagate the key themes and ideas that match our school's directions.

Soaking in this big picture thinking for two days does require some thought decompression and entangling of intertwined messages. I'll probably do that here over the course of a few posts here. But for now, as we begin the descent into Adelaide, this will do as the first part of that process. 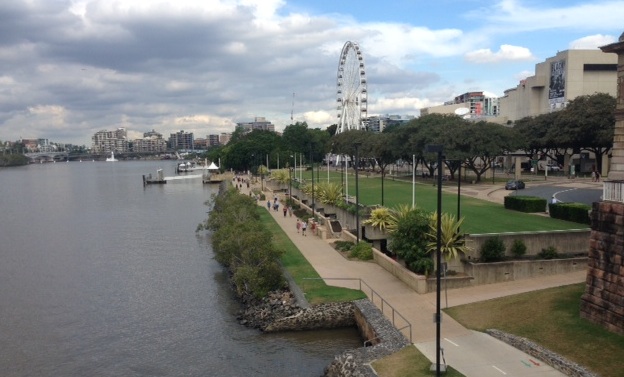 Brisbane, Southbank side, pic by me.