Here in South Australia, it is that time of year when mid-year reports go home to parents. I know there are a number of schools exploring and implementing better ways of reporting to parents using online technology but for the majority of South Australian primary schools, the reporting process is fairly uniform and consistent. Of course, things have evolved over time. When I first started teaching in the mid-80's reports were hand written before then being drafted by hand and then typed up by skilled teacher aides. Eventually about over the last fifteen to twenty years it has evolved into a digital template (often as a Word document) where teachers allocate grades, evaluate social skills and dispositions towards learning and then write several paragraphs addressed to the parent / caregiver about the child's progress thus far in the school year. Every school I've ever been at has had its own template, and more often than not kept tinkering with layout and sections to try and improve the final product. I can remember writing a five to six line paragraph for four core learning areas and then add a twelve to fifteen line summary that drew all of the observations about the student to a fitting conclusion. I suppose it says a fair bit about the slow pace of change in schools that I am still seeing a similar end product for reporting purposes now as from when I started my teaching career.

It is the written component that many teachers find difficult and laborious. I have seen teachers who have copies of books titled "Great Report Writing Comments and Phrases To Use" because they lack confidence in their own ability to construct sentences of quality. I have met teachers who openly admit that writing is a process that they dislike immensely, which leads me to wonder how they inspire their students to embrace and enjoy the art of writing in their classroom. I have been lucky. I actually quite enjoy the process of writing and reflecting on a student's progress, and I thought I got pretty good at it. I know this from positive feedback I have received from parents over the years, from the fact that my proof reading colleagues have rarely corrected or changed any of my paragraphs and how when I look at other teachers' reports (as I do now in my role as a leader / line manager) I know straight away if they are of a high standard and if not, I start mentally rewriting them as I read, drawing my own knowledge of the student into play.

So, I think that there are several components to successful report writing and a few definite issues or practices to avoid. The end goal should be that after the parent has read the report, their reaction is that the teacher really knows their child. Statements that are bland and wide open leave the parent wondering if the teacher really does know their child, and if they don't, how can they trust any of the assessment judgements made elsewhere in the report? So personalising the comments is essential. Saying the child is "a good student" is meaningless. I really like it when teachers offer examples to back up their observations - Johnny has shown great leadership skills within our classroom as he demonstrated when organising the Red Nose Day for our class. I don't mind teachers outlining some of the topics or content covered as long as they are also commenting about the child's learning within that.

I think it is important to strike a balance in terms of the amount of information offered. A general comment that goes on and on and flows beyond the allocated space means that the writer is struggling to be succinct, and if I look closely might also contain doubled up phrases, overly descriptive language and use of meaningless cliches. The flip side is when too little is written and tactics like excessive paragraph breaks and a larger font are used to disguise the lack of written reflection. When editing reports, I would rather deal with the former as excess can always be tightened up and pruned back. I have generally found that these teachers really do know their students but struggle to contain everything they have to say neatly into the space provided. Too little gives an impression that the teacher does not see fit to elaborate about this student or that maybe they haven't taken the time to really get to know that student.

Some teachers' solution to the report writing blues is to adopt a formula. This can be helpful when used as a guide of things they want to cover within the report but the extreme version is where a cookie cutter report is written and the names of the students are just swapped in and out with some slight variations in choice of adjectives. The give away for these is when gender pronouns do not match the student, where another student's name is still present or just the gnawing feeling of deja vu as I plow through the class set. (Really, every student in this class is a pleasure to have in the classroom and completed their mid term book report to a reasonable / good / great / amazing standard!) Following a formula is smart as long it isn't copy paste and again, I can tell if the teacher is really reflecting on what the child has achieved:
Polly has structured her written texts well this semester. She frequently makes very strong connections between her experiences and the texts she is exposed to and writes about them with clarity. Ways for Polly to continue to promote improvement in her writing include elaborating her points further, explaining her position in finer detail and reviewing her usage of apostrophes of possession.
You can see that this sequence of sentences can follow a similar pattern for every student in the class BUT they have to be written individually. After all, each student has different strengths, abilities and ways of approaching learning, and will also have very individual goals to focus on moving forward.

Then there is also the power of positivity. I agree that sometimes parents need to know the plain unvarnished truth about their child's efforts towards learning but there is still a way of doing it that avoids insulting or straight out negativity. Take this example:It is important that Harold understands the value of asking for help or clarification as he often waits for the teacher to notice his errors or uncertainty, while a more pro-active approach will see him getting help sooner and making better use of time.
This points out the issue but instead of laying blame at the student's feet, offers a productive way forward. Parents will appreciate that.

Finally, a lot of teachers like to address the student directly in the last sentence or two. I don't mind this tactic even though the report speaks to the parents as a focus, and I have done this myself on a regular basis. But as it finishes up what you are saying, make it strong and make it count. Don't write something insipid: Good luck - I know you can do it! Be personal and memorable: Fergus, do not settle for average. Use your diary, apply yourself and see the change. We wish you the best for high school.

So if you've been writing reports, proof reading reports or are still to tackle them, remember that in many households, these documents are hoarded and treasured. You should feel proud of what you have written and want it to stand as a high quality example of teacher assessment of learning. Remember that this post is only from my perspective and should not be held as a definitive set of standards, more as food for thought and a plea to keep the quality high. 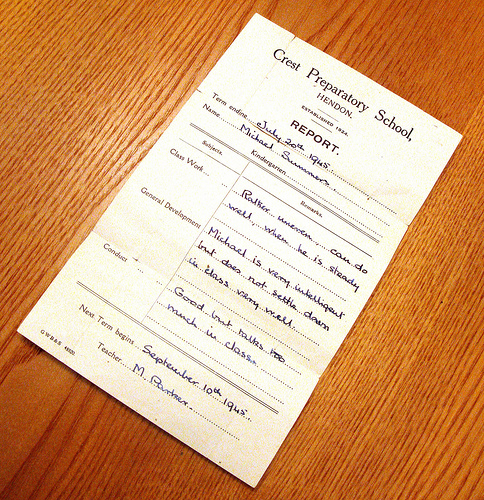