We've had our MinecraftEDU server running for over a year now, and I thought it would be a good idea to document some of the initiatives that are starting to bear fruit. I am lucky that one of our technicians is an experienced Minecraft user and enthusiast, and setting up our server and giving me remote desktop access was a breeze for him. It has taken me a while to cement the process of starting, saving and creating new maps but essentially we can have as many Minecraft "worlds" as needed, but only one of them can be running on our network at any one time. This is useful because I can designate worlds for specific purposes, give classes their own world and have some free time lunchtime worlds where the action is more free flowing and less purposeful.

I have a Digital Leader program where students volunteer their time to come along to help assist the lunchtime Minecraft sessions. I have a trolley of laptops with suitable graphic capabilities, and every lunchtime I am a travelling roadshow with 5 different buildings hosting Minecraft @ Lunchtime on their own allocated day of the week. The Leaders help with setting up, troubleshooting and technical advice. One Leaders also looks after the Teacher Controls and monitors activity, reminding players about respect and fairness. Originally we had sign up sheets because the whole concept was so popular - and it became a really good option for some of our students who struggle to make good choices out in the yard at break times. Now, we generally take the first dozen kids who are asking, balancing it up if we see someone new and asking some super regulars to take a break to fit them in. It seems to organically work without over-organisation.

Slowly but surely, a few curious teachers have asked for some support to see if MinecraftEDU could be used as part of their learning program. Our Vietnamese teacher was the first, using a new world with a Year 2 class to build Vietnamese temples and other buildings as part of cultural learning. He didn't need much support but has remarked about the engagement with the task and how the students have looked at architectural features from images from the web and sought to incorporate them in their designs. This has also made them open to the information sharing around the purpose of the temples in Vietnamese culture provided by the teacher. Another teacher wanted her students to showcase their learning on animals (I think she was doing information reports) by reproducing a habitat or enclosure suitable for their animal to live in, along with providing key facts for visitors to read on a Minecraft sign.

Another teacher wasn't sure what she wanted to do but was impressed by the engagement factor she saw during her building's lunchtime session. She saw the collaboration and design, and thought that maybe we could tie it into Mathematics. For this class, I created a perfectly flat world and got the students to build their own house and fence it off as a way for everyone to experience some initial success. This was a Year Five class and it ranged from highly skilled kids who use Minecraft daily at home to students who had only ever heard of it. I set the task and reminded them that they could learn from each other and that sharing skills was something to be encouraged. The engagement was amazing, hooking in all students even the ones who could be described as quite disengaged. The sharing of knowledge went well, and there have been some great examples of working together that I did not anticipate. There is one student who has limited English skills, having missed the opportunity to be part of an English-intensive New Arrival Program class because of where the family initially settled in Australia who finds it hard to succeed in a traditional setting because the way instruction and tasks are delivered. However, in this task, she worked with three other students (and friends) who are bilingual (and proficient in her first language) and together they scaffolded the task with her, working collaboratively to produce a co-located set of townhouses, that also included new features like a linking pathway to other students' buildings. Our plan is to link this to Mathematics by exploring the mathematical properties of each building - shape, measurement including perimeter, area and even volume. 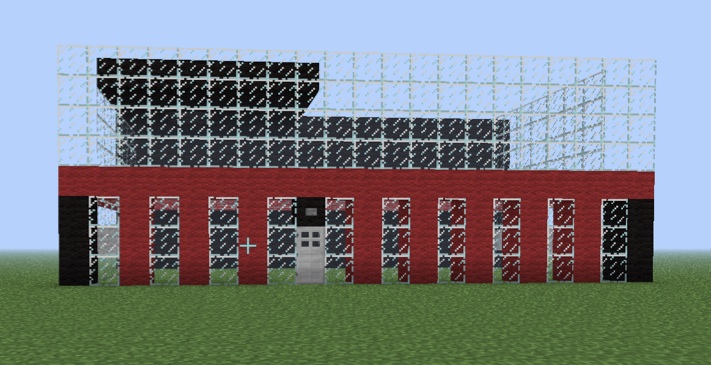 Front view of a house under construction in the flat world. 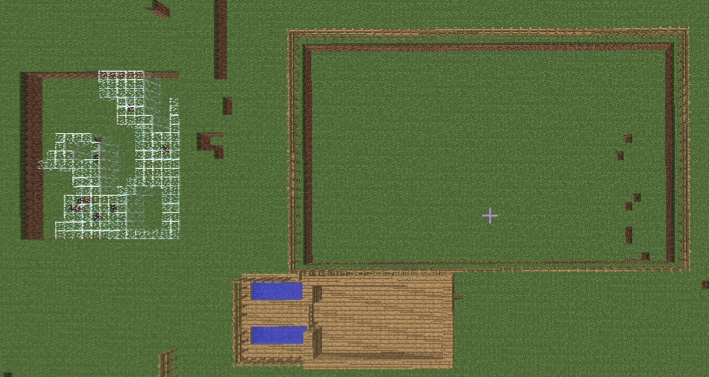 Bird's eye view of houses under construction - perspective is another concept easily explored in a manipulative way in MinecraftEDU.

It is great to have as many worlds as needed but I discovered a pitfall last week. I was working in my office when two students from the Year Five class burst in with agitated looks on their face. "Mr. Wegner. Some other kids are in Minecraft and they're destroying all our stuff! All our work is getting ruined - we need help!"

I went to investigate and found a teacher had given her students some "free time" to use the MinecraftEDU server without really knowing what it all entailed. The Year Five class had been working in their world the previous afternoon while I had been at a meeting, and so I hadn't had the chance to save their map or change the world over to one where collateral damage wouldn't be such an issue. In one way, I was pleased that the Year Fives viewed their Minecraft work as learning that they valued and were upset to have destroyed. But I had to work out how to minimise the damage. In the end, I got the offending (unwittingly and an apologetic teacher who didn't know that there was more than one world) class to stop, and change over to a lunchtime world but chose NOT to save the Year five class map. That meant that it would revert back to the last time I had worked with the class on the Tuesday. It did mean that any changes made on the Wednesday when I was out were gone but it was preferable to saving a world that had the effects of rampaging Year Twos thinking they were in a fun zone, not realising that they were messing with other students' work and learning. So, monitoring which world is up and when is key to ensuring that students' learning is preserved.