For someone who likes technology, particularly for learning, I have never been that interested in the field of robotics. For all of this recent focus on coding and programming in education, I haven't really got swept up in becoming personally skilled or knowledgeable in the area. I recognise its importance but have to admit to putting things like Lego MindStorms in the "too hard" basket. My interest has always been in the internet and like many self taught learners, it's easy to play to my own strengths and steer away from might be a steep learning curve out of my comfort zone.

The recent release of the Australian Curriculum for Technologies (pending final endorsement) has renewed the focus on specific ICT and digital technology skills. The Technologies curriculum is now split into two specific subjects - Digital Technologies and Design & Technology. The latter of these contains much of the SACSA Design & Technology curriculum and its focus on Design/ Make/ Appraise so in general, most of my primary school colleagues feel comfortable with the expectations of that subject. The Digital Technologies curriculum is a more specific focus on skills and knowledge that our previous state curriculum spent time integrating throughout the curriculum. So it feels a little bit like subject matter that is making a comeback even though we know that digital technologies work at a more sophisticated and lower cost point in our daily lives than even ten years ago. 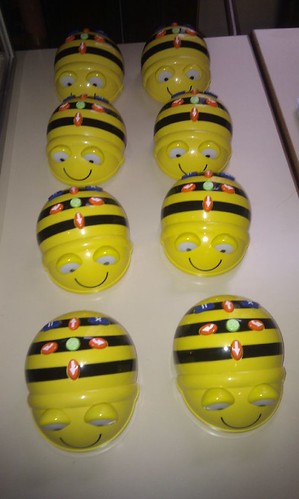 We held one of our student free days as an Australian Curriculum focus, and had two DECD consultants spend half of the day focussing on the Digital Technologies curriculum. 2015 is a familiarisation year and we looked at several of the key concepts like computational thinking and programming. We looked at and used BeeBots and one of our talented upper primary teachers showed how her work with Lego MindStorm robotics was giving students opportunity to program. This teacher has been totally self taught after recognising the need within the upper primary students and led the way in overhauling our resources for Lego Robotics. She has spread her expertise across the whole five class unit, and even fostered interest through a lunchtime club. So, again, I know her work in this area is good but I have never dabbled using these tools myself. The BeeBots are great - simple in terms of setting out a sequence of commands and very accessible for early years students. After the day, I had a lot of teachers requesting that our meager supply of these robots be replenished. I've ordered them and they are on their way.

So, Beebots filled that need for the programming part of our new curriculum nicely for our Early Years students, and MindStorms is targetted at the Upper Primary area so I asked the consultants what would be best for the Middle Primary Students (Year 2, 3, 4) and their suggestion was the Probot. I then remembered that there were four of these sitting in a tub in my office! These were from one of the closing schools (my school was formed in 2011 from 3 smaller sites) and hadn't been touched in four years. To my mind, they weren't that much more sophisticated than the BeeBots, and when I went to purchase some, the price for each was over $160. That was $100 more than a BeeBot - withe major differences being that it was larger (not really a plus) and had an input screen so that instead of pushing > four times, I could key in 4> for the same result. Not exactly a quantum leap forward in extending programming skills, and potentially could have students complaining that Probots were boring and they were doing the same stuff as they would have with the BeeBot.

So sitting at my desk, I was hesitant to buy the fleet of Probots for the school because of these concerns. So, I turned to my trusty ally, the internet, as I was sure that there must be a better alternative to the Probot. Something to bridge the gap between BeeBot and Lego Robotics - but unique and engaging in its own way. I remembered that I had something that might be useful in my neglected delicious account - and found Romo. This is a neat idea where you plug an iPhone into a robotic base and interact with it. This was promising but not quite what I was after. The school isn't flush with iPad Touches and iPhones so I went looking anew. 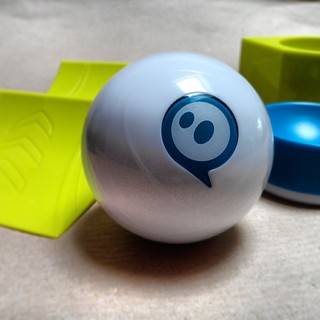 Then I found what I was after - Sphero. Basically a ball shaped robot, controlled via apps on a tablet or device. The site was informative and I liked the fact that it linked into its own Education section. One of the Apps where I could imagine potential was MacroLab where users can create macros; basically long lines of commands in order to get Sphero to perform a particular action or routine. I could see the programming aspect coming into focus - but unlike MindStorms where the robots being built are very sophisticated, the ball robot was conceptually very simple. I watched some videos, and went to see Marg, my line manager, who has a deep background in digital learning to see whether her impressions matched mine.

My original thought was to buy one and play with it myself to work out the potential. Marg was more confident. "Buy a class set if you think that they are what you want," was her reassuring reply.

I ordered them from the Sphero US store, and they arrived in under a week. (I am still waiting on the BeeBots, ordered from an Australian company!) I paid the GST import duty and bought power adaptors as they shipped with the US version. I bought covers for the Spheros and several Terrain packs which have click and hold pieces to create obstacles and barriers to manouevre the Sphero through. I also purchased an original Sphero on eBay (I ordered Sphero 2's for the school) for $46 as an investment in my own professional learning.

So, they are pretty cool and I think that they will serve the purpose I envisage. I had a search through my blogging connections to see if I could find anyone I knew using them for learning - my only link was to Wes Fryer's STEM resources as part of his after school Maker's club. He had four of the beasts and was feeling well resourced - but I had ordered fifteen!

How does Sphero work? Basically, the ball needs to be charged prior to use on its own induction stand. Three hours charging gives the user an hour's worth of constant use. I've downloaded about nine apps to try but the first one I have had students start on is Drive, a simple app that gets them to use the tablet as a remote control for the Sphero. They can control direction, speed and colour within that app. The standard Sphero app is wrapped up in a gaming interface where points accumulate for Missions and can be exchanged at the Core Exchange for pre-programmed Macros or tricks. This app is the one that gets users thinking beyond just getting it to move around and crash into things. An example is the Frog macro where Sphero turns green and jerks forward with a timed croak from the app. There are many others but these "tricks" then can lead to using MacroLab, where users can then create their own - the actual programming!

I'm only in the beginning stages of this all. I have been using my Digital Leaders at school to become the student experts using Spheros, and I have had to think through many logistical issues when using then ranging from charging to security, from sourcing enough iPads to dealing with multiple Spheros trying to connect to their iPad via Bluetooth all at the same time. These devices could suck up a lot of my time if I allow it, but I also still have to introduce them to staff, provide support in their use in classrooms and in planning for the coverage of the Digital Technologies curriculum. But this is still the first robot that I have got seriously excited about. We'll see how it progresses.