This link popped up via Ewan McIntosh in my Feedly reader today, and reading the article sent me back in time to 1995, when I started teaching at Flagstaff Hill Primary School in southern suburban Adelaide. The whole premise of the Washington Post piece is that open space work environments as apparently championed by Google are not really working that well, and that the drawbacks are outweighing the anticipated benefits. What surprises me (as it will many educators) is that the open space concept is supposedly new, and this analysis had me thinking back to my first experiences in an open space work environment.

Flagstaff Hill was built in the early eighties when the open space concept was really taking off. Two of the larger buildings had this design, while the other major in the primary section was a double storey block with more separate, privatised classrooms. I was a young teacher straight in from country service and I arrived ready to teach a Year 4/5 composite class - the principal told me that I would be in Blue Unit, one of the open space buildings, built to accommodate six classes with minimal shoulder height dividers between teaching spaces. There were four smaller withdrawal spaces that could be used for working in smaller groups and in the centre of it all was a "well" a recessed section where a class could sit on the ground in a rectangle pattern with their feet in the depression - conceived as a common meeting space. 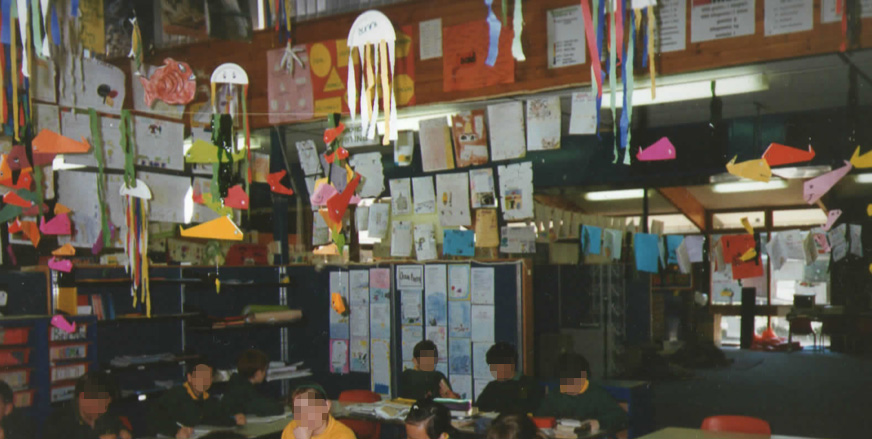 This view looks back into the centre of the unit. There is a semi-permanent corner divider in the centre of the pic, and off to the right in the background you would find the "well" and then beyond another teaching space. You can tell I liked dangling displays back then!

The coveted class areas were in the four corners of the building where teachers could lay claim to two solid brick walls, while in the centre were two class sections where the front wall where the whiteboards were mounted being the only solid part of that classroom space. It was to this space that I was directed. I met the vacating teacher who gleefully told me she was getting out of Blue, and heading over to Orange building where she would have her own room and not "have to share" any more. I guess she had decided that "open space" classrooms were not for her.

This is looking frontwards to the only permanent wall in my 1995 classroom. Note the trays and portable dividers that separate my classroom from my neighbour's on the left side of the image.

I was lucky that I lobbed next door to a teacher who would become my closest friend in education, and we used the openness to dabble in team teaching, and to explore progressive teaching methodologies over the next eight years (although not without shifting around the Blue Building, and then eventually into the vacated library). So, I think that we were able to make the open space environment work but it does take a certain mindset and there are a lot of differences when compared to a traditional classroom where the door can be shut and the rest of the world kept out.

Noise and visual distraction were a factor in open space classrooms for sure. I recall agreements around times of the day when things were asked to be a bit quieter and everyone was always mindful of the effect their learning activity was having on their neighbours. In that way, because in a few steps you could see what every class in the unit was up to, that mindfulness tended to work favourably. Until .... you got a colleague who didn't want to embrace that ideal.

I remember one teacher, in our building for the year, who didn't concern himself with anyone but his own classroom. He loved doing construction stuff with his students and we used to joke that it sounded like the scene from the beginning of the Flintstones where the whistle blows in the construction yard and Fred just abandons his work and heads for the door. He also used to have a tradition of the "tray tip". If he found a student's tray of belongings to be in a less than stellar way, he would hold the tray aloft over the child's desk and ask the class loudly (and of course, the whole unit heard the whole thing) if he should tip out the contents forcing a clean up by the culprit. This was then followed by a whole class chant of "Tip, Tip, Tip!!" until it reached a crescendo and the tray was upended in front of the helpless offender. The practice was extremely popular with the Year Three kids in his classroom until one day he grabbed a tray of a student who had unfortunately left an unfinished flavoured milk carton in amongst the crumpled up worksheets and pencil shavings. The carton had been in there for several weeks, brewing beneath its folded in spout. So when the "Tip, Tip!" chant started, the student was powerless to warn the unsuspecting teacher about the contents in the tray. The tray was tipped, the carton exploded all over the desk, the odour was over powering, and to top it off, the student then threw up all over the contents. The stench was such that all five classes were vacated for the clean up (and the shared air conditioning system made sure that his error in judgement haunted us all for quite a while).

But when all teachers were on the same page, the environment worked quite well. Swapping groups for lessons was easy because one can see if the other class is ready. A teacher could work with a group in a withdrawal room knowing that other teachers in the building could "keep an eye" on the remaining students working independently. It forced inventiveness when it came to displaying student work. I hung netting from the ceiling and used paper clips to hold art work in place. Collegial consultation was the norm, rather than the exception. 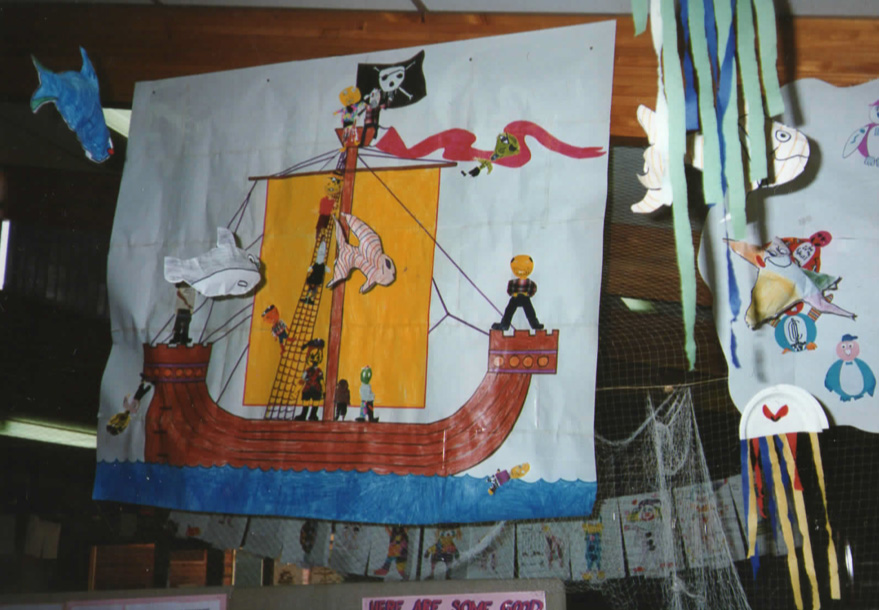 Another hanging display in front of the netting - the pirate ship goes with the dangling seaweed and jellyfish art pieces. If you look carefully, you can see a penguin infested paper iceberg on the right.

I know that when I moved to my next school and had to return to a closed in classroom with only a door connecting me to my next door colleague, I felt boxed in and less inspired. It was harder to see what my colleagues were up to but then again, it probably spawned the next productive phase of my teaching journey where my colleagues and I moved to an online environment (using a wiki and Skype) in order to grab back the natural collaboration that I feel is possible in an open space environment.

Really, teachers have to make do with the spaces they are given. There are plenty more sixties style prefab box classrooms out there as there are eighties style open spaces. My teachers at Woodville Gardens probably have the best of both worlds in their more modern concept classrooms that open onto a shared common area, but that is not to say that they one day might end up in a heritage listed building (like my wife taught in at Lockleys Primary) where thick brick walls and concepts of learning from a century ago influenced the architecture. Teachers and learners don't really need seclusion - the concept of breaking down the classroom walls is clearly not a new one!