I am looking forward to EduTech. I am lucky enough to be leading a group of seven of my staff off to Brisbane in under two weeks time. Several have been wanting an opportunity like this for a couple of years now, while others are nervous about participating in such a high profile event early in their teaching career.

However, across my network connections, there is a growing trend towards bagging EduTech both as a concept and as an event. I am not saying that some of the criticisms aren't valid or that educators aren't entitled to hold views that are anti-EduTech. It's just that incessant bleating of the same complaints over and over again that give out the vibe that it is an evil, money-sucking, leeching parasite of a conference for gullible teachers that I feel is unnecessary. I get the sense that some people would rub their hands together with glee if they heard that this event that has risen to prominence in just a short number of years was about to fold or to discontinue.

I've read the complaints. Overseas speakers get buckets of cash while our poor Aussie compatriots get no monetary recompense. It's too expensive. It is too big and too impersonal. It's a big echo-chamber. Too many vendors peddling wares to unwary schools. Too much celebration of the edu-celebrity. There's elements of truth in all of these generalisations. But it's not the total story.

There has to be a reason that huge numbers of Aussie educators flock to Brisbane - and it's not because we are all gullible sheep lining up to get fleeced. There has to be a reason why the big name speakers resonate with teachers - including teachers who don't join state professional edtech organisations. Everyone has different reasons - I can only share mine.

I enjoy the different speakers, especially the ones from beyond our shores because they can sometimes present ideas in new and different ways compared with the way institutions involved in learning operate in Australia. Everyone has their asking price, and if someone like Sugata Mitra is asking a six figure fee and EduTech are prepared to factor that into their expenses to put him in front of me (and several thousand compatriots), I don't have a problem with that. As with all speakers (and anything being spoken, written or conveyed about education and learning) the onus is on the attendee to be a critical consumer. I don't have to agree with everything that Sir Ken says as I feel that my learning is most informed by the tensions or points of difference that I notice. And being plugged into Twitter at the same time enables me to see into other people's brains at the same time and see how the story is resonating or reverberating there. I see more pushback or added value via Twitter than nodding and regurgitating but it could just be that I have chosen who to follow intelligently and strategically. The money angle is interesting because all speakers have a limited window of opportunity in which their reputation can reward them financially - does anyone remember Jamie McKenzie or Marc Prensky? These people were forward thinking at the time but their potential conference learning power has certainly diminished.

EduTech is not cheap but it is no more expensive than other similar sized events in Australia. The sheer size increases the chances of me meeting up with educators I currently connect to (I hate the phrase PLN) and meeting new teachers to add to those connections is awesome as well. Yes, there are lots of vendors there but I have never engaged in a conversation with a sales rep or consultant unless what they were showcasing piqued my interest and I wanted to ascertain if there was an opportunity of value for my school.

For me, it is a future of learning festival. It is not like the local EdTechSA conference - it is a totally different beast. It is big picture, forward looking and unashamedly so. I have seen first hand how exposure to new ideas as a live event (as opposed to watching a YouTube recording) has spawned innovation and forward movement at my own school from the colleagues who attended last year. It was a chance to press pause on their day to day classroom practice, deeply converse with their colleagues, see ideas from fresh and multiple viewpoints and resolve to rethink things when they get back to their classroom. For example, Scott, a colleague who heard Ewan McIntosh speak last year about Google-able and unGoogle-able questions went back and started a rethink about how he got his kids to research. This spread to his learning team and a planned approach to rethinking the middle school opportunities and learning programs for our students. Today that group attended a Design Thinking workshop with Tom Barrett as the next logical step in that process. The EduTech spark that got Scott pondering has lead to a steady flame of progress at our school. I am confident that my 2015 group of attendees will find sparks of their own.

So, I get that some people don't like the idea of for-profit event like EduTech. I get that they feel disrespected as Aussie educators of repute when they aren't offered dollars for their time and expertise. I don't have that problem because I'm not going to get asked or even imagine that I would be in that market space. I'm just happy to have a 7 minute slot at one of the TeachMeets and share that space with a bunch of educators who I wouldn't get to meet face to face under normal circumstances. I suppose that it all boils down to your own expectations. But for me, slagging off EduTech as a constant theme is tiresome. Plus it is kind of ironic to be moaning about a corporate influenced event on a platform like Facebook.

So if you are reading this, will be at EduTech and you see me, please say "G'day." I am a bit of an introvert so breaking the ice with new people is always welcome. And if you're not going, no worries. Everyone has different priorities - and a conference is just one way to get the brain connections buzzing. 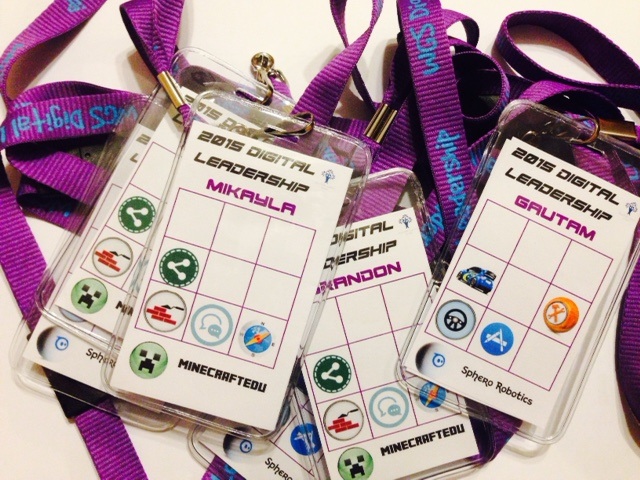 Tomorrow morning at the Primary Years Assembly, I will be presenting six more Digital Leaders lanyards bringing the number of newly qualified Leaders up to twenty two. My photo shows the pile ready with the badge grid showing badges earned so far complete with the glamorous purple lanyard (called the forgotten colour of our school uniform by our Music teacher!) with teal custom printing.

The cost for each lanyard is around five dollars. The plastic sleeve is worth about fifty cents and the printing is a few cents extra. A modest investment considering what the students and the school get in return. We are not talking about privileged students here - far from it.

Worth every cent, I say.