Last year, I compiled a virtual version of EduTech for my staff, hunting videos that were close to the presentations that we saw live. It is over on our staff blog but seeing I've done the hunting and embedding, there may be readers who might like a look as well.

This year, the WGS attendees included Kellie, Julie, Bianca, Vas, Jayne, Mel, Tamsin and Graham. This year we had our own Twitter hashtag #wgsET which helps to collate all of our resources, insights.

Here are some links and videos from some of the presenters:

Nick Jackson from Adelaide spoke eloquently about digital Leadership and ended his talk with this jawdropping conclusion.

@largerama We know a lot about so much today, but there are still things we don't talk about. #EduTECHAU#roguepic.twitter.com/WETylRWN5t

This year was the third time that I have been to EduTech. In 2013, I went with Frank, my principal and we noticed that a number of South Australian schools were sending groups of teachers rather than just a couple of members of their leadership team. I must have been in a major blogging slump then because I didn't reflect on any of that conference although Dan Pink was there, so was Gary Stager, Stephen Heppell and Alan November, along with Skype-ins from Sir Ken and Salman Khan. So in 2014, we expanded the group going to include my fellow AP, Anna along with three teachers who represented the Early Year, middle primary and upper primary teams. That conference featured a huge line up of big edu-names, none beamed in, including Sugata Mitra, Sir Ken, Ewan McIntosh and Ian Jukes. I blogged about that experience here.

I think I've become the defacto tour guide for our school because late last year, Ashley, our Early Years Head of School pulled me aside and said that senior leadership had approved funding to take 8 people to the conference in 2015. I know that last year's attendees have all used many of the ideas to improve their practice, to become more connected to others beyond our site and to become drivers of innovation in terms of learning opportunities for our students. So, we ran our process and selected our participants and we headed out last Monday evening for Brisbane. The group was a good mix of year level expertise, experienced and early career teachers, excitement and nerves.

I decided that I wouldn't spend time during talks making notes because I didn't want to be carrying an iPad or laptop around all day - I thought my phone would do the job. Using Twitter, I either posted a quick observation or favourited someone else's tweet to build up a timeline of gathered cyber-notes. I had done my research about who I wanted to see - and was pleased to see that two speakers, Shelly Terrell and Simon Breakspear, who I was keen to see were available after initially being booked out. I even volunteered to speak at one of the four TeachMeet sessions about my Student Leadership program. I hoped to catch up with educators that I normally only get to converse with online but apart from that, I was hoping to be quite open and flexible about my EduTech experience.

Now, I know that EduTech is a commercial event with loads of sponsors, a huge vendor area but I've stated my opinion about that a couple of blog posts back. There are useful things that I might want to consider purchasing for my school and I'm not forced to go to any of the booths. For instance, I got to see first hand the 3D printer that I'd been recommended, and hopefully will be able to cash in on a special they were offering at the moment. The Maker Space area was filled with great making and coding resources (I like Cubelets and Little Bits) but guess what, they cost money.

But the value was in the discussions with my colleagues - What did you think of that? How do you think that would go at our school? What do you need to get things happening? What's challenging you right now? What tells you that you're on the right track? What does this all mean for our students? We sat and listened to Eric Mazur together, then went our separate ways, then met back up and talked and then scattered and then crossed paths again. I got to catch up with online colleagues (Sue Waters, Tom Barrett, Ewan McIntosh), and compare their work with my own, to catch up on the gossip and introduce some of these personal influences to my day-to-day colleagues. I met some more recent online links for the first time as well (Corinne Campbell, Matt Easterman) and chatted with other South Aussie colleagues (Paul Luke, Dave Henty-Smith, Nick Jackson). We got the whole group happening on Twitter - regular users helped the novices to build out their connections in a flurry of first time tweets, retweets and favourites.

If I had to pick a couple of highlights, I would say that the workshop with Shelly Terrell was the number one pick. She talked about and demonstrated online spaces both for teachers and students. She was so easy to listen to and a ninety session passed in no time at all. I also enjoyed Eric Sheninger, whose insights about leadership in a school striving for continual improvement and innovation were invaluable as one who aspires to meaningful leadership. I even bought his book, "Digital Leadership" but stopped short of getting it signed like some did (never understood the appeal of autographs, really). I wasn't as dedicated as I could have been about getting to sessions and missed a few that would have been good. Being a previous delegate, I could tell where the sponsor's sessions were on the agenda and knew when to vote with my feet. I'm not sure what the solution is in that regard - sponsors who have paid big dollars will want their product featured in one way or another but educators are too savvy to get sucked in for anything too blatant.

So, 2015 was still a solid investment for my team. The names weren't as big as 2014 but the conversations we had were just as important. I can't think of any other event that could provide what we got from our two days and expose them to ideas and concepts that will spark action back at the workplace. And I'm looking forward to see how that all plays out.

So, last night I decided to get with the times and check in on one of these #hashtagED Twitter chats that few of my online colleagues have been saying are the ultimate in online PD. The one that was being promoted a bit at EduTech was #AussieED and I took note of the 8.30 pm AEST start time, and dutifully watched for 8 pm my time with my trusty iPhone at the ready. I even saw the topic was around this idea of being a teacherpreneur which I thought could be interesting as it threw my mind back to a recent Stephen Downes post in which he wrote:

Why do I dislike the idea of teaching entrepreneurship so much? Because it changes the child's perspective from the idea of serving social needs through work and learning to one of serving the needs of people with money. And when you have this perspective, you can never get at the question of why these people have all the money in the first place, and you can never perform work which changes that.

This observation really resonates with me. Being an entrepreneur means the world of business, money making, exploiting of marketplace gaps and investing in hope of a future financial payoff. There is no problem with entrepreneurs in the education space - consultants, software developers, PD providers and so forth - even if some believe that they are more crucial than what they really are. But to apply that label to classroom teachers or school based leaders, well, that is a big stretch in my mind. So to me, a "teacherpreneur" would be someone from a teaching background constructing or plugging a service or product. But clearly, I am in the minority.

I was not really prepared for the scope of the #AussieED experience. I had loaded up TweetDeck and straightaway the tweets were running off the page so fast that I couldn't even read one before it was being bumped down the page. The moderators had posed some questions - the first being "What is your understanding of a teacher entrepreneur?" And it seemed like anything went ...

A1. A educator who spends their time in the creative and innovative design of pedagogy. #aussieED

A1 A teacher who creates, invents or re-invents an idea, system or product to more adequately meet the needs of learners #aussieED

@ICTEvangelist A1: Someone who invests in the needs of students and makes it their business to enhance youngsters' life chances. #aussieED

@ICTEvangelist#aussieED A1 - one who tests, tries and believes in their ideas reaching out to as many as they can..inclusive to the core

It was starting to sound like anyone or anything could be classified as a teacherpreneur - but these responses seem at odds with the first hit on Google:

Then a couple of tweets came through that was on my wavelength.

The term edupreneur is just another way to commercialise education. Look at the feed on this tag already #aussieED

Brendan Jones ‏@jonesytheteachr
A1. Someone looking to exploit a niche. Regards the term intellectual property loosely. Doesn't need to be a teacher. #aussieED

And it was true about the feed on the tag. As my head spun from all of the one way traffic on the #AussieED tag, I was amazed that there was very little pushback or challenging of the concept. It seemed universally accepted that being an entrepreneur is totally a positive thing, and not only that, almost anyone and anything related to teaching could be see as entrepreneurial! I figured to make any sense of this at all, I needed to start at the beginning with the initial question, and it got some traction with one of the moderators. The screengrab shows the conversation as it unfolded.

Anyway, at that point, I thought I would bail and go work on a blog post or something but I thought a brief acknowledgement to Brendan Jones was in order: 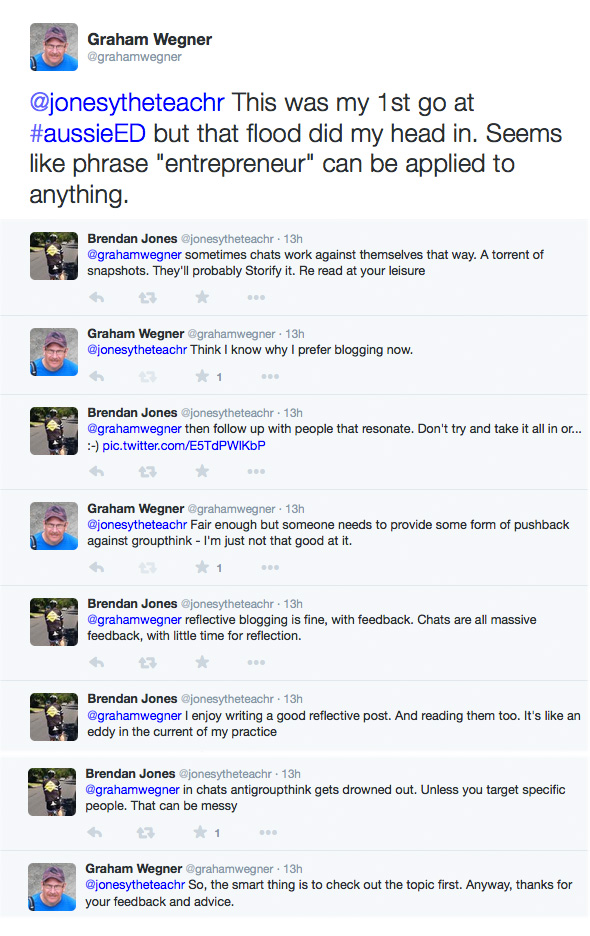 And there was the word of the night - antigroupthink - which summed up perfectly my experiences on that topic in #AussieED. I'll participate again sometime in the future but not before checking out the topic thoroughly first, and working out a strategy for dealing with the torrent of tweets.