I can remember a conversation with a fellow Year 12 student back in 1983. He said, "On the last day of school here, I'm going to walk off the grounds, turn around and take one last look at this place, and then turn around and never look back."

As far as I know, he has been true to his word ever since. I can relate to his perspective because high school does not hold any special memories for me. So it was with a wry smile that I noted that this year's EdTechSA conference was to be held at my old school, Immanuel College in the brand new senior school named after my year 12 English teacher (probably one of the better teachers I had in my secondary years). I was a boarder for 5 years and the new centre sits right on top of where the old boys' boarding house used to be. So it certainly brought back some conflicting memories to be heading back over the past two days to attend and present at this year's EdTechSA conference.

Where once were rooms lined with beds and wooden cupboards, has been replaced with a contemporary learning environment that reminded in some ways of the Australian Science and Mathematics School up at Bedford Park. For a smallish conference, it was the perfect venue. The theatre was comfortably full for the keynote speakers, the rooms were spacious for the various workshops and the program was full of great learning opportunities.

Things started out well with an engaging keynote on Global Learning from Julie Lindsay. Her words got me thinking that my school Woodville Gardens is very global with its large EALD population - kids who come from refugee backgrounds alongside of second and third generation kids whose families still head over to Vietnam or India for a few months every year to catch up with family. She reminded me of my old online collaborative project with Doug Noon's Alaskan kids, and got me thinking about the possibilities that could be utilised at my current site.

I got to play with an Arduino board in one session and gain a starting view into the SOLO taxonomy. I heard about some new web based research tools and then played around with QR codes and AudioBoo in the afternoon. I got a better insight into the potential of Lego EV3 robotics, introduced a bunch of educators to the engagement of Spheros and rounded off with a spot of 3D printing and an insight to Jarrod Lambshed's journey with his Connected Classroom. 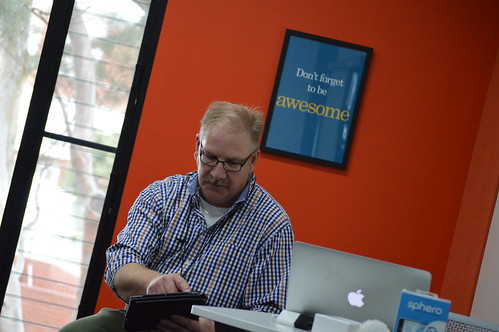 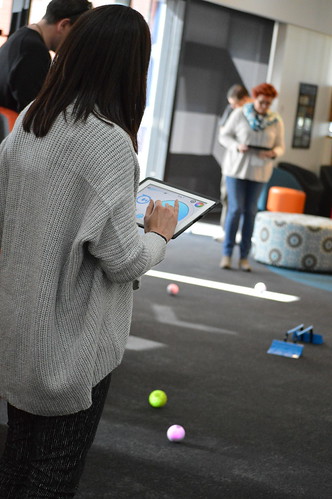 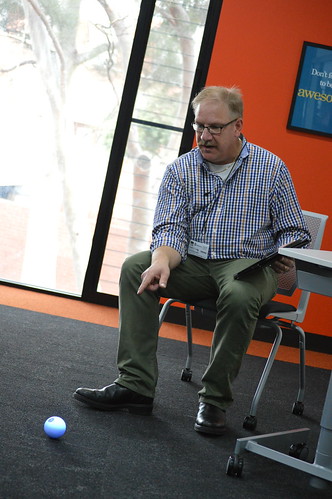 So, great conference, very cool venue, learned heaps, but I never got the urge to stroll around memory lane or check into the Old Scholars office. Like Tom March alluded to in the final keynote, some things are best left in the past.

Feedly has replaced my Google Reader as the place to read blog posts from my wide array of learning sources. There's a handy little feature that enables you to Save For Later. I use this for posts from bloggers who have written something cool that I either find challenging and want to explore further, or in the case of this post, they have managed to write about an issue that I've been thinking about in a very clear and concise way. Simply, they have said it better than I could. So, I thought I would share some of these now.

How Language Shapes Solutions - John Spencer.
The bit that I wish I had written:

Ultimately, we have these intense conflicts in education that begin with the implied metaphors. The hardest thing is that it's so easy to forget that other people are using language tied to a metaphor that is vastly different from your own. What feels cold an impersonal to some makes sense to others. What feels shallow and subject to some feels warm and human to others.

I have problems with other people's words a lot of the time. Well, more accurately, I find it frustrating that a phrase or snippet of language can be bandied around social media as it is universally understood or accepted. I don't like the over-frequent use of the acronym PLN as one example especially when phrases like "welcome to my PLN" and "thanks to my PLN" oversimplify and narrow the concept of people connecting online for the purposes of sharing and interacting with each other. I dislike the word "edupreneur" because it sounds exploitative and gives off a vibe that being an educator isn't enough - one must transcend that and be an "edupreneur"(said aloud in a sarcastic tone). For me, an entrepreneur is someone seeking business opportunities in new territory and buys into that myth of modern consumerism that everyone can be rich and successful when the reality is that for rich people to exist, the poor must be the ones who lose out. For me, I can't combine those mental images with my self perceived role of educator as working for a social good - the words fight against each other. So, call me an "edupreneur" and I'll probably be insulted. As for PLN, I just see myself as participating in networked learning. PLN is just a way of trying to make a group out of a bunch of digital connections.

Is online sharing about the journey or destination? - Stephanie Thompson
The bit that I wish I had written:

I worry that we’ve got to the point we’re all so used to being spoonfed content, that we’ve lost something along the way. Genuine conversation.

One of the things that drew me into blogging was the ability to connect, as you followed a person’s writing over a period of weeks, months and years you got to know the writers as people. There are so many people I’ve met, reconnected with and stay in contact with through blogging and tweeting.

And I feel like that community has been lost.

We’ve become less attached to conversations and people and are now much more likely to turn to quick fixes.

The rise of the expert bloggers and tweeters with thousands of follows has permanently changed the tone of edublogging and not for the better. A lot of the content showing up online isn’t conversational in nature – they are standalone pieces designed to be re-shared through vast social networks.

I like the fact that Stephanie links to my good friend, Tom Barrett, in the middle of this section. Because the only way that I know Tom is through the conversational medium of blogging - without that connection, we would be just two Twitter handles occasionally crossing paths. Stephanie makes some really good points throughout her post and points to many other great learning thinkers in the process. I just think she sums things up a lot of my feelings in a really concise way. And it just occurred to me, there are some educators out there who think Twitter = PLN!

Online identity, work spaces and folios – a celebration of awareness - Leigh Blackall
The bit that I wish I had written:

Most people who do a search on their name come to realise that the search result is essentially the first page of their online identity – their folio. It could be personal, it could be professional, often it’s both. Their next realisation might be that the way they work online, the processes, platforms, linkages and associations in the data that they generate, all has an impact on their portfolio-as-a-search-result. Their search terms and saved bookmarks, the media they upload and download, their playlists, click-through history, viewing times, purchase history, GPS location, and strength of linkage to other people, collaborators and projects. All this data is built up around us as we work online, and can be used to create, shape and grow a personalised and professional workspace. It can be harnessed to improve the quality and efficiency of our work. Our search results on topics of inquiry can become more targeted, or recommendations and linkages can be made more relevant. This includes advertisers and surveillance agencies of course, which at this point in time at least, we might consider as our symbiotic relationship.

Read that bit and you realise that PLN is too simplistic a term to describe what is really going on every time you use the internet. As regular readers will know, I have the deepest respect for Leigh as a thinker and analyser of online learning and wish that anyone involved in education trying to leverage the internet in any way would go and familiarise themselves with his huge body of work. He really is one of the great minds of the last twenty years or so, deserving as much (if not more) credit than many of the higher profile people commonly cited in online spaces.

To keep things manageable, I'll share one more Save.

Mixed advice about social media - Dr. Ashley Tan
The bit that I wish I had written:

You also cannot always be positive. Sometimes you have to be point out flaws, be a critical friend, or simply provide balance. But you can do it professionally and after you have established yourself as a trusted entity.

Some people might label providing an opposing view as “negativity” and the author advises disconnecting with it. This is not always advisable because you might suffer from group think or delude yourself into thinking that there is no thought contrary to your own.

Ashley was responding to a post that was serving out some "social media advice" and it is an issue that I struggle with a lot, especially on Twitter. My efforts to be thought provoking can come across as being provocative, my attempts at counter argument can appear to be anti-concept and often the result is:

There are days when posting on Twitter is like yelling into a giant fan. No one can hear me against all that air.

Now I have no idea how that links to Ashley's post at all but I do like the fact that I don't have to be agreeable or follow other people's rules of conduct when using social media. As long I have my own personal code of conduct to follow, I am free to express myself in the manner of my choosing.

But now, the right thing for me to do would be to go and give these people a bit of feedback via the comments on their blogs, because a Twitter shoutout does not do their work justice.