I actually titled my first post about Spheros and my July EdTechSA conference workshop as "Meet The Robot That Got Me Interested In Robotics." It's true. I have neglected the area of robotics and programming for a long time. It was a personal blindspot and one that I felt guilty about but willing to leave because I felt that it would be outside of my comfort zone. I even felt like a fraud being a so-called leader in ICT or eLearning who had yet to properly engage in the STEM arena.

I'm getting better and I know that it is important. I even went along with our Lego Robotics teaching guru, Mel, to our state Lego RoboCup event. I still don't know a lot about being hands on with Mindstorms gear but learnt a lot by watching the two teams compete in the Soccer division and the Rescue section.

The good thing about my school is that we do have teacher leaders who will take ownership of initiatives and run with them with little more than moral and budgetary support from me. Our Beebots are used widely in our Early Years classes with a couple of teachers taking the lead - and we have had our kids use them for learning Vietnamese!

But Spheros in our school has been my own journey. I have added to the original 15 Spheros that I bought in March, bringing two Sphero SPRKs and four Ollies in as additions. I just want to reflect on what else I have learned since the last post when I was still just working with my Digital Leaders.

This term, I started to work with some classes within my own building. I am line manager for four classroom teachers and my office is based in that building. I am also the self appointed Sphero maintenance person - I keep them secure, charge them prior to use and kept tabs on the apps needed on the building's squad of 10 iPads. Just prior to starting with the first class, I saw a tweet about an app called Tickle that uses a Scratch style interface to program a number of connected robots including both Sphero and Ollie. It is easier to use than MacroLab and as I was about to introduce programming robots to Year 3 and 4 students, it was the perfect tool to use to set some simple programming challenges.

I listened to a great podcast on Teaching With Sphero Robots which I found via Wes Fryer, where I picked up a great tip about numbering the Spheros and the iPads and pre-connecting them so that when woken up, there isn't the Bluetooth configuring or misconnections that can happen when multiple Spheros try to connect to multiple devices simultaneously. This was fine except for when I had a flat Sphero that meant grabbing a new one, waking it up and connecting it out of this carefully planned sequence. I lined up Digital Leaders to help out in the classrooms and we made a start with three different classrooms.

The students used a checklist sheet that was based loosely on the badge system I had been using with Digital Leaders and a skills sheet I used with staff during a Student Free Day professional learning session. Basically it works them through at their own pace to gradually move from using the Sphero as a Connected Toy over to using it to Program. I set a simple programming Challenge as the first step for using Tickle. 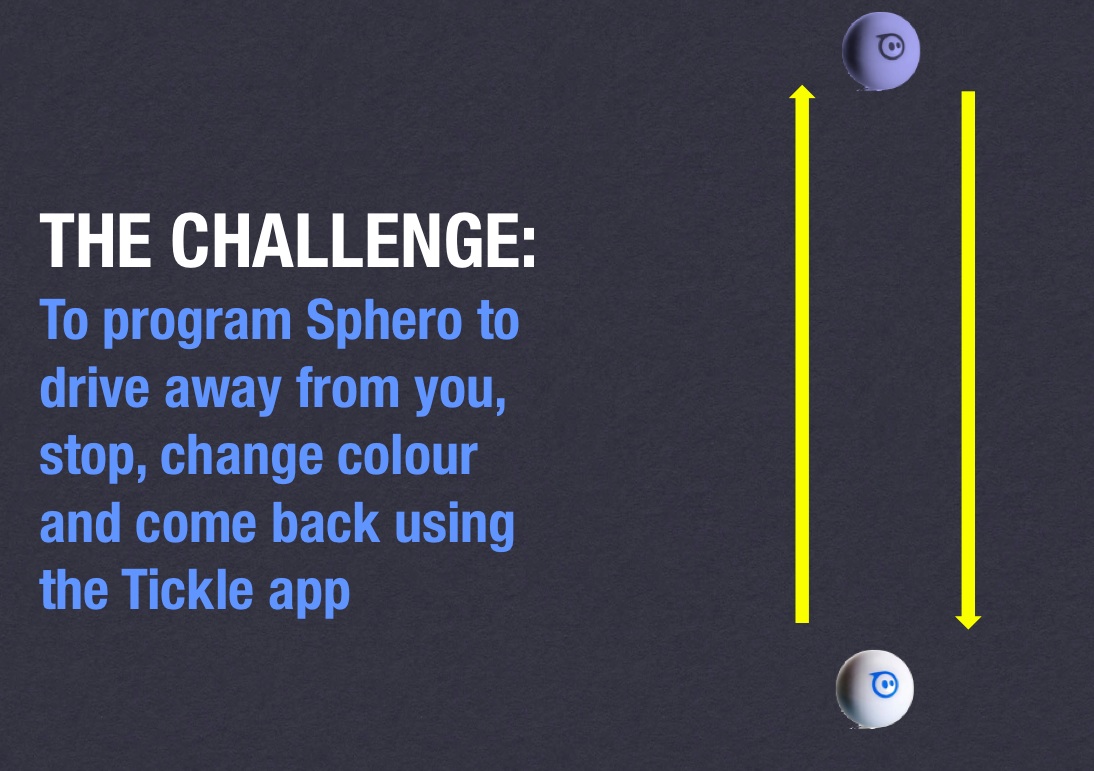 This was very engaging and I was surprised at how quickly kids adapted to the app and completed the challenge. For those who were struggling, some help from a Digital Leader gave them the confidence to persist and work through. The next step was to design a maze and program your way around that maze using Tickle. I created an example maze using a large Nerf Gun box but one of the teachers I worked with, Salma, suggested that masking tape on the carpet would work just as well. The common area between the classrooms is now covered in a variety of challenges! Again, watching how some kids went into a flow state of trial and error as they tried and adjusted and tried again until their Sphero was following their predetermined path and changing through a planned sequence of colours.

This was really pleasing to see. The checklist sheet become the self directed learning sequence, and kids would call their teacher over to see them achieve the next skill and have it signed off, so the formative assessment angle was working really well.

Using this sort of technology will always have its issues and you just have to be flexible and adaptive. If you are patient and just work through ways of solving a problem, the kids see that approach being modelled and immediately reduce their own agitation when things "go wrong" or "don't work". Sometimes a Sphero wouldn't charge properly and it would mean getting a spare and helping them get connected so they could get back on task. Sometimes Tickle would lose connection with the Sphero and so a process of shutting down open apps and then re-opening them would solve the problem. The great thing was that all three teachers picked up their comfort levels using these robots and didn't require me to lead their following lessons  but were more than happy for me to be the person to ensure they were charged and organised!!

One thought on “Sphero Robotics Update”