In my second year here at WGS, I had a conversation with the Primary Head of School about how we might cater more effectively for some identifiable students with mathematical talent in our school. She was wondering out loud whether the Westpac Maths Competition would be a good idea. But then I remembered entering students from my previous school in the Mathematics Challenge For Young Australians (MCYA for short) and how I thought that it was a well constructed competition that focussed on the application of mathematics to problem solving situations, rather than being an exam type scenario conducted within a day.

We tried it out that year across several year levels, and the students really found it engaging. We even had a group of high ability Year 4 students who we entered into the Year 5 division. I remember sitting with this group, explaining how the challenge worked. You had four worded problems to solve, you had three weeks to do the challenge, you could work with others, you got to work independently, you had to show your working out, you sometimes had to explain your answers and so on. Later that week I checked in on the students and one boy made the comment to me with a smile that showed his keenness, "This is hard. I'm not used to maths being hard - usually it's easy for me."

Interestingly, this same group of boys are now in Year 7, midway through this year's Challenge. I was talking to their teacher, Jasmin, tonight and she was telling me how much they loved doing the MCYA. They were begging for more time to get back into it, and so we were thinking that we might enrol them in the Enrichment section. It has also been a great validation for other kids - one that I can recall was a girl from a very disadvantaged background who downplayed her abilities in front of her peers to the point where she started to believe that she was not much more than average. We put her in the competition and with a bit of gentle encouragement she slowly warmed to the expectations and realised that finding the solutions was well within her capabilities and that she could see possible strategies that remained invisible to her peers. And her friends got on board and told her what they already knew but she was trying hard to deny - she was really smart and Challenges that privileged kids take for granted is theirs for the taking, were well within her grasp. She ended up with a Distinction. For me, this is a really great competition that gets mathematical kids stretching beyond memorised algorithms. I like the fact that it allows and encourages collaboration. I like how it draws out kids who are a bit dependent on their after school Kumon diet into thinking about not only what is the solution but WHY is that the solution.

Thank you, Australian Maths Trust and the University of Canberra. You put out a first class offering for our talented Maths students and in this age of STEM heightened awareness, I am surprised that your competitions and challenges are not more widely touted. 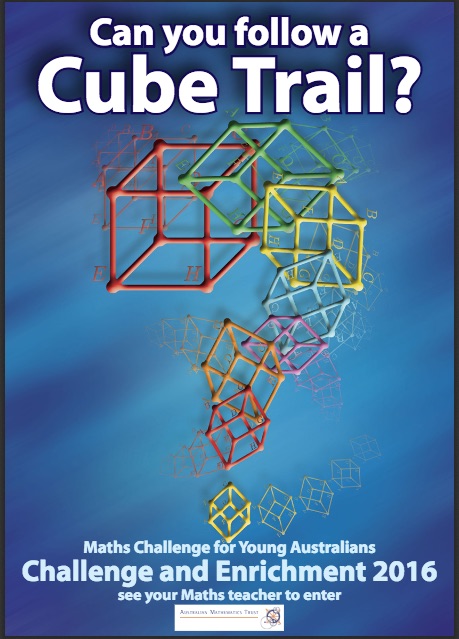