I haven't blogged a lot during 2018 ... and this blog is in danger of becoming a First Lego League focussed affair on the rare occasion that I do post. But I think that being a coach in this program is one of the most enjoyable things I have done in a long time. Being a coach appeals to me - I have long toyed with the idea of being a basketball coach but my lack of knowledge of the game from a player's perspective has stopped me going down that track. I coached a SAPSASA football team way back in 1994 but being involved in FLL is the coaching gig that ticks all the boxes for satisfaction and enjoyment for me.

I feel like I haven't done a bad job either - going from almost complete ignorance when I arrived at Prospect North in early 2017 to now having taken my team to the National Championship two years in a row. I am still no master robotics expert but the beauty of FLL is that you don't need to be. A coach just has to be willing to read, learn, ask questions and manage the group of students. A coach doesn't need to provide solutions as the kids do the work, but a coach can help to point the possible pathways to enable the students to work towards their ambitions.

This year's season started way before the actual launch date of August 1 - see this post for a full description. This is a summary of where we went from that point. I have to admit that my team, Synergetix, were very self organised and allocated roles within the team well before the Into Orbit season launched. The focus for the project was the subject of some discussion - the research team decided that the focus was to be on the dangers of radiation, specifically, gamma radiation. After the 2017 research project idea of a hand held filter that had no research about how a filter actually works, and a low-key presentation, the team were keen to aim higher for high tech solution to a complex problem. This is where as a coach I had to trust that they knew their science because it was clear the project was out of my realm of knowledge.

The robotics team also got to work to improve on last year's booklet robot design. They used a book that I had purchased, Winning Design! to build a robot and then modified it to be able to navigate the Into Orbit game table. It took a while for the two technicians to work together though - there were two different interpretations of the book's demo model, and then the two worked on two separate sequences of missions with attachments that only suited the robot they were coding on. Both technicians did really well in a short period of time as they were essentially rookies. One, Minjung, hadn't touched the robot in the Hydrodynamics season and her offsider, Salia, picked it up for the first time after learning the basics from one of the research team. I can still remember Minjung suddenly calling out early in the year after messing around with a robot, "I can't believe it! I can code!"

The two of them eventually got on the same page in regards to coding for the one robot, and another member, Vedant who did a lot of coding in 2017 also contributed. As he was also having a major say in the direction of the research, I had to use my coach's management skills to steer him back to his area of responsibility and allow the other two breathing room to develop their own approach. They were both quick to problem solve when the situation demanded. One of the missions, Escape Velocity used a arm with a double tyred wheel on an arm to bash down to launch the little Lego spacecraft (arcade strength game style) and Minjung used a panel on the side of the robot so it could ride down the side of the table at the right width to line up. When we went to the Regional and had our practice Robot Game, she discovered to her dismay that the walls of the table were lower than our school one and the robot didn't stay on line. She quickly adapted by switching some parts around and mounting the panel lower to compensate. The head referee really liked their solution for that mission but noticed that Minjung had used rotations to control the robot the entire time and that if the arm swung and missed the target and got stuck, it would not proceed any further because it couldn't complete the rotation. He suggested using seconds for that command so that it would still move onto the next part of its programming. Minjung also implemented that change all before the first official Robot Game.

My favourite moment of that Regional was in our first Robot Game round - you can see it on Facebook here - is when both Minjung and Vedant realised that they still have 30 seconds left to go and no extra mission to run because everything had gone so well! I think that was powerful because they realised that they could strive for more and raise their ambitions within the constraints of that challenge. And going straight from that successful run that would be their best score of the day to the Robot Design judging meant the team was on a high and eager tp talk up the positive aspects of their robot, their strategy and their coding, all showcased in an impressive Engineering Notebook. Of course, other aspects of the day were also enjoyable - the Project presentation went well and the Core Values judges spent a long time talking to the team at their pit table - my take is always that the longer the conversation goes on in this aspect, the more the judges have a opportunity to be impressed.

It was interesting to chat to the team members who were there in 2017 throughout the day because they were keen to and able to compare their progress from one year to the next, and were even quietly confident of success. The inner pessimist in me always mentally prepares myself for low expectations to lessen disappointment but I thought that we had a good chance of moving onto the State Championship. It was great that one of our other school teams got that opportunity as well.

There were two other teams from our school involved as well - Lego LUNAR-tics, capably coached by my colleague, Gail, and FLIT who I was responsible for as well as Synergetix. I did find out that for me, juggling two teams does not really work. I had the helping hand of Marg, my principal, who managed FLIT's sessions for me at the Regional but I still feel that they probably did get a compromised coaching  experience from me. They were all rookies and because they didn't really know what to expect, they didn't really think that there was that much to prepare for. Therefore, they needed reminders to come up and work on things during their break times - in the end, that didn't happen a lot and only one person, Cooper, came up to regularly work on coding their robot. Maybe it was just that the team struggled to be unified  or I assumed that because H2Flo (who became Synergetix) were self motivated as rookies and used their differences to come together, that this team would eventually do the same. That is, until the deadlines started looming!

I think they still had a positive experience - one FLIT member was particularly defensive of the FLL program when someone posted a negative comment on an Instagram post, and a number of that team cited FLL as one of their highlights in their Year 7 graduation speeches - so the fact that they didn't win a trophy or progress shows that part doesn't really matter. I just know that I could have done a better job of coaching them - but I have learnt my lesson and will only take on what I can manage in 2019.

As far as Synergetix's progress went, you can read about it on the team website:
Regional Report
State Report
National Report

This post has been sitting in Draft form since just before Christmas so I will hit the post button now and do some follow up posts on specific aspects in the next few weeks. 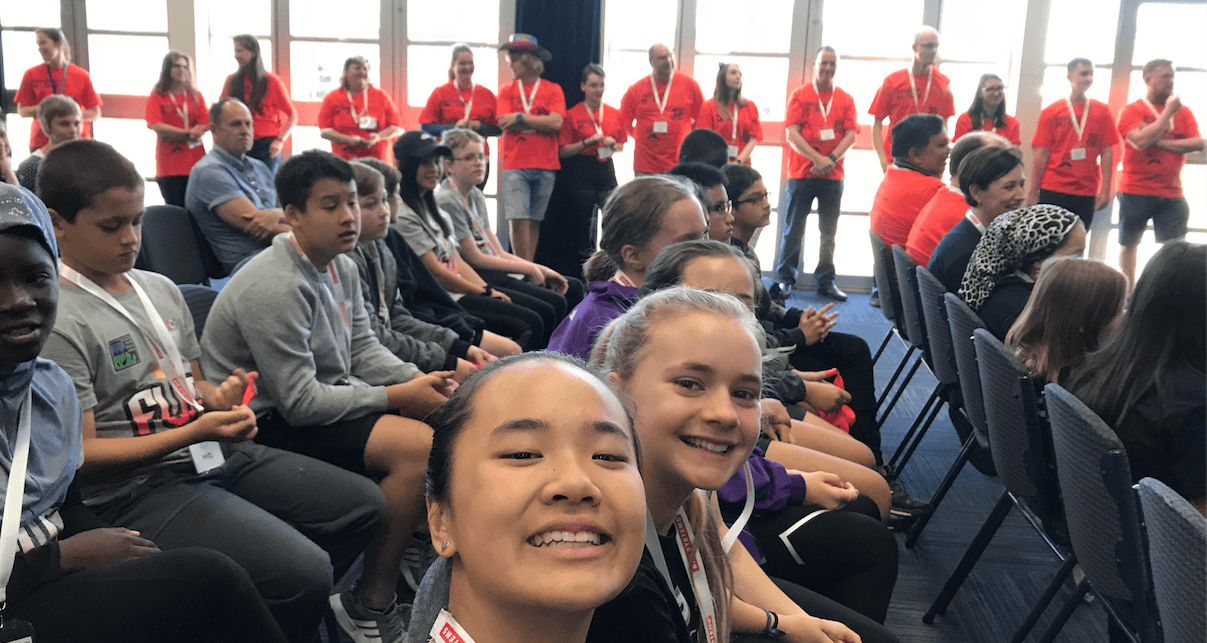 One of the few pics that show members of all 3 teams - FLIT in grey, Synergetix in black and the far right is Lego LUNAR-tics in navy.