My last three posts have been focussed on my first foray into First Lego League and the students involved. But together with my fellow AP, Nicola, we also decided to get started with First Lego League Junior this year to broaden STEM enrichment offerings at Prospect North, and to cater for younger students. Nicola had heard about the program before so I decided to do some research. First Lego League has been operating in Australia since 2006 (worldwide since 1999) but its younger cousin is much newer (worldwide since 2007) and seems to have been available in Australia for a few years. And while there were three regional tournaments for FLL available here in South Australia, there were no official Expos planned for this state.

What is involved in First Lego League Junior? An short excerpt from the website sums it up best:

Focused on building an interest in science and engineering in children ages 6-9, FIRST® LEGO® League Junior is a hands-on program designed to capture young children's curiosity and direct it toward discovering how science and technology impact the world around them. This program features a real-world challenge, to be explored through research, critical thinking and imagination. Guided by adult coaches and the Core Values, team members work with LEGO® elements (LEGO WeDo Kit) and motorized parts to build ideas and concepts and present them for review.

Each yearly Challenge is based on a different theme and has two main parts, the LEGO® Model and the Show Me Poster.

Teams consist of two to six children and are guided by at least two adult coaches. During the season they will:

The culmination of the hard work for many teams is the participation in an expo event ... Volunteer Reviewers at the event interview the teams to learn about their LEGO® Model and Show Me poster. All the teams are celebrated and leave with an award.

I had bought Lego WeDo 2.0 kits for the school as one of my first investments from the STEM budget and worked across the Year 2 - 4 classrooms to give students the opportunity to use this very hands on technology. FLL Jr is tied to the use of WeDo - and so together, Nicola and I decided to offer this opportunity to four teams of students from ages 6 - 10. We started by asking the Digital Leaders who might be interested, and then asked the Year 1 teachers to nominate a student who would benefit from the experience.

I ordered four team Inspiration Model kits which are part of the year's program. This year's theme was Aqua Adventure, which ties in with the FLL's HydroDynamics theme. The kits were ordered from Macquarie University and cost $20 each. When I looked online to find out a bit more about the kit, I was very pleased to see that each kit had over 700 pieces! Lego are a bit like Apple in that they don't really do discount on their products so these kits represented phenomenal value. When I told my principal, her first reaction was to ask, "How many of these kits can we order?" Schools can always use more Lego. 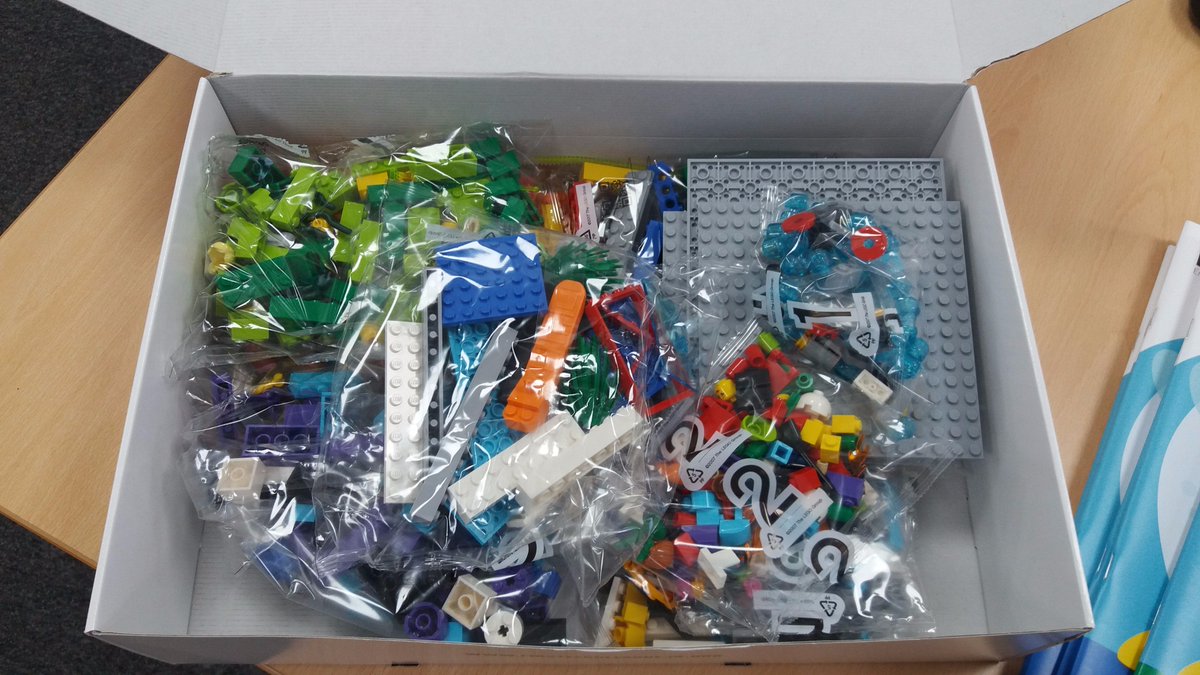 There is also an Engineering Notebook that is given out to students in the US but it raises the costs of registration significantly. Here in Australia, participating coaches could access the Notebook via a download link which I cannot share here. The Notebook was a great scaffolded learning journey that Nicola and I used as a blueprint with the students, covering ideas like the PlayPump™ and getting kids to use Lego to engineer concepts along the way on the them of human water use.

The four teams gave themselves theme based names and we nominated Year 4 students as leaders to keep the mixed gender and year level teams on track. These leaders helped to design the team t-shirts which also helped build the excitement as we worked our way through the ten week program. We decided to hold our own local Expo with the goal of expansion in 2018 once we felt like we knew what we were doing. With a few weeks to go and while balancing the responsibilities for the Hydrodynamics teams and a school commitment to hosting a Kids Teach STEM conference for our local partnership schools, we nailed down an Expo date. The teams worked towards this by typing up what they had learned and displaying it on large ShowMe posters. The working models were constructed - even though they did not approach the scale and complexity of what we could see online. Nicola and I worried about our standards not being as high and the students' work needing more depth but in the end, the students did a commendable job considering how much time they were given and that this was a brand new process for everyone and no one really knew how it would all turn out.

The models had to demonstrate a solution to a water based problem for humans. One team looked at how to decontaminate water, one looked at recycling water for showers and other non-drinking purposes, another two showed how to filter household water out to a garden or other purposes. 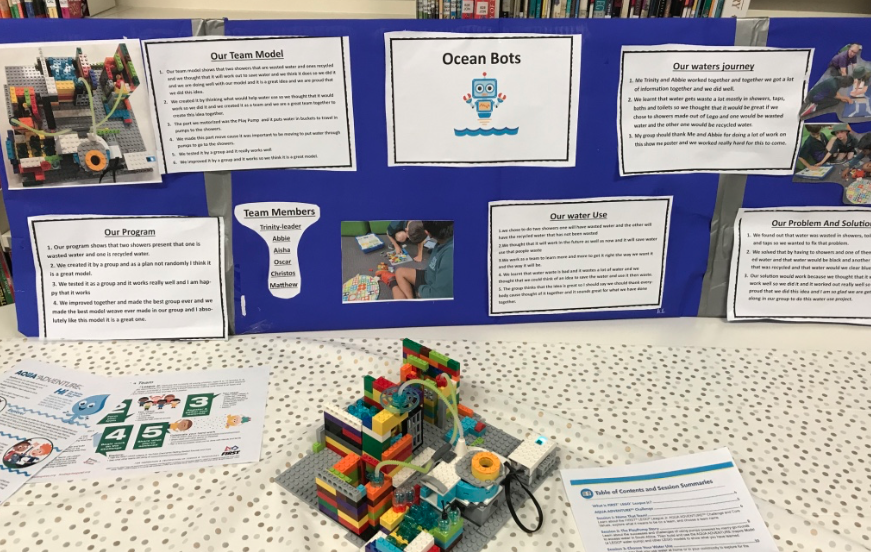 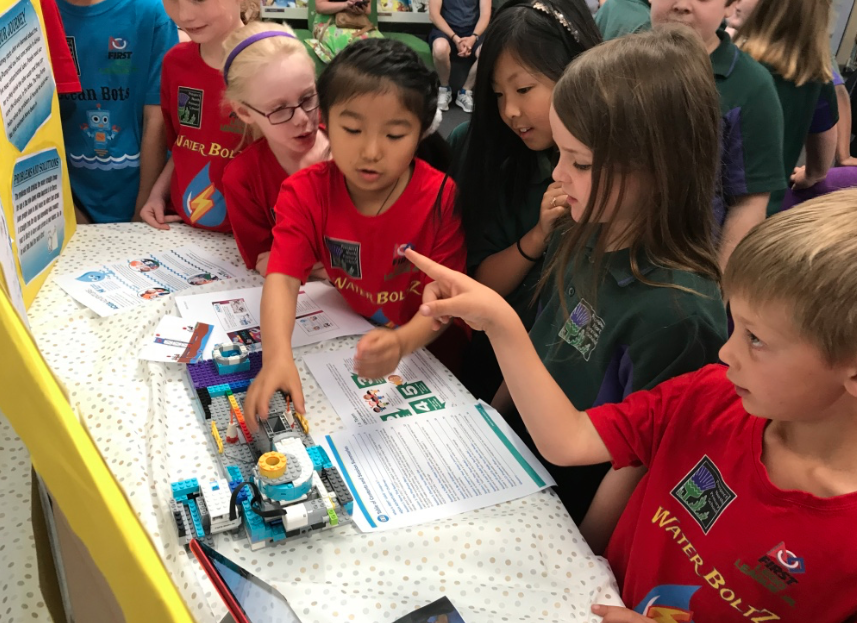 So, the day after the Kids Teach STEM Conference, we gathered in the library for our initial FLL Junior Expo. The four teams were dressed in their various coloured t-shirts and stood proudly by their displays. I had some small Lego based trophies for Awards out on display - the rules state that each team must win an Award if awards are given. I had the team names on lego blocks that were to be added as the Awards were determined. More parents than expected came along for the introduction and I even made contact with a grandparent who was a retired engineer who was full of praise for the event and offered to be of service to our school with possibilities of STEM mentoring in 2018. After parents and classmates had a good look, it was time for the teams to be reviewed. Marg, our principal and Phil, our retired Scientist in Residence did the reviewing and some senior FLL students ran a Core Values activity and a Guess The Famous Lego Minifigure quiz for teams while they waited. We then held our Closing Ceremony with certificates for all participants via the traditional High Five Line, and the trophies were awarded to each team. 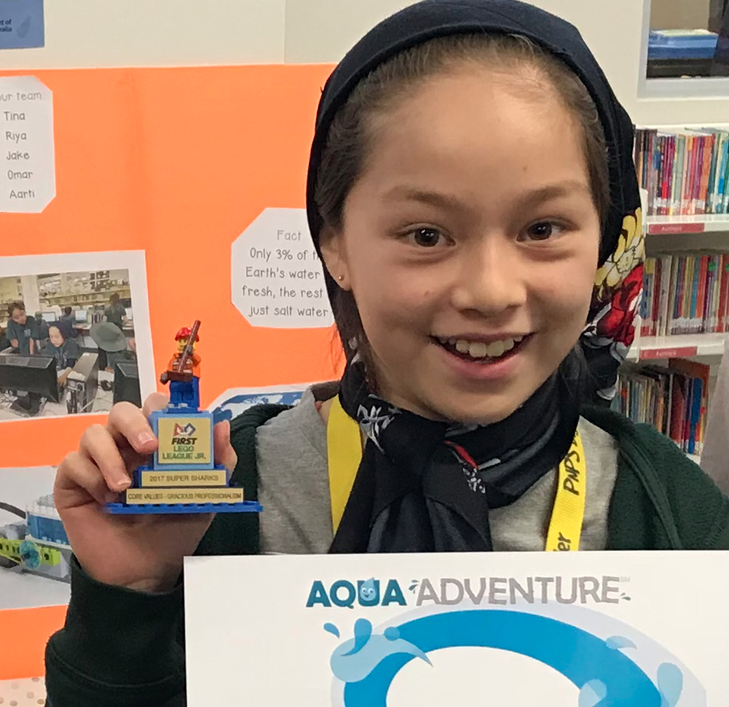 Check out my custom Lego trophy in the student's hand!

The whole program was quite successful and I hope to promote this out to the wider education community here in South Australia, with the goal of becoming the official host of the First Lego League Junior here at Prospect North. So, if you are from a South Australian school with a 6 to 10 year old demographic and you are reading this, it is a great opportunity. For the cost of $20 for the Inspiration kit, it is a cheap STEM enrichment option. Feel free to email me - graham.wegner499@schools.sa.edu.au

So, a couple of teacher have approached me about some help with their buddy class project - they want to do Stop Motion videos. Now, being the resident Learning Technologies leader does not mean that I have my finger on the pulse of all things edtech but I said, yes, of course I will help. I figured that I would just learn ahead of time, on the fly so to speak, modelling being a learner. Stop Motion has been around for years in classrooms, with Plasticine models being a popular choice paired with web cams and stop motion software. With the advent of iPads and a rising popularity in the use of Lego, I thought that I would try to see if I could whip something passable using the Lego Movie Maker app.

One Day On Tattoine from Graham Wegner on Vimeo.

My son has plenty of Star Wars lego around the place so that was easy, getting the iPad to stay still was solved by building a Lego cradle for it, and the background was printed off the web from a fan image from DeviantArt. It was difficult to get the whole set in shot and I am still not happy that the background takes up more real estate than the foreground - it would probably be easier to use my iPhone but the kids will have to use iPads so I needed to foresee issues from that perspective. There are plenty of videos on the web on how to improve the way it hangs together and my character voices are pretty terrible (except for Obi-wan / I think I do a passable job there). I might have another go over the Easter weekend but I can see the key will be sourcing plenty of mini-figures for the fifty odd students who will be creating their own stop motion masterpieces. Not that is - a masterpiece, that is. Wow, starting to type like Yoda already.