Learning can take many forms as I recently found out. Brian C. Smith, who is mobileminded on my twitter network, was looking for takers for an online Fantasy Football league. (Gridiron is the name Aussies use to differentiate this type of football from our parochial, gladiatorial version commonly known as Australian Rules.) I emailed him to see if a token Aussie would be welcome and before long, I had my official invite in my Gmail. I logged on, signed up and chose my logo. My new team, Wegner Dingoes was now ready to take on Team Shareski, Team iPederson and Drape's Dogs amongst others.

So I'm about to embark on a huge learning curve as I participate in a completely new pastime. Draft picks, trades and even the trash talk are all new concepts to come to terms with so that all of the other competitors don't view a clash against the Dingoes as a soft win. As the basics of inquiry learning point out, successful learning takes place when building on prior knowledge. I used to enjoy watching Don Lane's NFL show on the ABC back in the early nineties before all of the coverage switched to pay TV and I lost interest in following a sport I couldn't watch. I was a Raiders fan (back when they were still in LA) because they reminded me of my favourite local Aussie Rules footy team, the Port Adelaide Magpies who also had a "us against the rest of the world" mentality and a "if you don't love us, you hate us" attitude. I read imported copies of Sports Illustrated and entered the competitions Don would promote on his show.

But that was a decade ago and I've gotta become familiar enough with the players, the whole format of Fantasy Football so that I can actively participate in the trash talk messaging and do something different from edtech with edtech types. 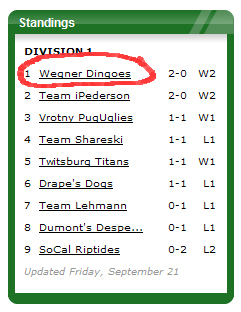 Footnote: After two rounds I'm sharing top spot with Team iPederson so that makes this week a top of the table clash. Hmmm... better go check my roster.